Into the Wild Nerd Yonder by Julie Halpern 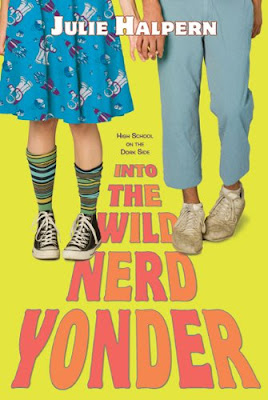 Punks, Poseurs, and Pervs—Just Another Day at High School


Jessie is so excited to start her sophomore year of high school, with her carefully planned outfits and her ample stash of school supplies. But things take an unexpected turn when everyone in her life changes. Her two best friends have gone poseur-punk and are both flirting with her longtime crush. Her beloved older brother is about to go off to college—and he shaved his Mohawk and started dating the homecoming queen. Jessie is suddenly clique-less. When she starts chatting up a girl in homeroom, she’s surprised by an invite to join the Dungeons and Dragons crowd! Will hanging out with them make her a nerd? And when she sees how cute one of their members is, does it really matter?

I have to applaud Sarah for spotting this one on one of our Foyles trips. The storyline appealed to me hugely, what with being a nerd, a gamer and being one of the clique-less girls at school back in the days of yore, I suspected that I'd enjoy the book far more than I had the right to.

Jessie is such an utterly awesome character. Honest, sweet, caring, a bit confused yet so much her own person, you can't help but will her to come out ontop. Her relationship with her brother Barrett is so real and I wholeheartedly fell for him. In a rock band, with a mad mohawk, he is a bit of a bad boy but his grades are ace so not only is he cool, and in a band, he's also a clever kid. A great and potent mix. When her two best friends decide that they are changing their look and style over the summer, Jessie is utterly non-plussed. Why would they want to change from who they were to pseudo-Goth wannabes and hang out with Barrett's band? Jessie's big crush is what Scott Pilgrim would have called "the talent" in Barrett's band. The guy Van is a bit of a player and plays loose and fast with Jessie's heart, knowing that she has a crush on him.

When her best friend starts dating Van, she realises what all the changes have been about. Slowly but surely she carves out a niche for herself without Char and Bizza, her ex-best friends. She spends all her spare time making funky skirts from crazy bits of fabric. It's her "thing" and she loves doing it. She gets invited to a Dungeons and Dragons game by one of the girls she knows from school and after quite a bit dithering, she agrees to sit in one a session.

Her introduction, through Dottie, to the world of Dungeons and Dragons is superb. The way she explains things, her impatience and the things she says, I'm sure every gamer has actually been there starting out. It rang true and I loved it. Jessie is shocked to find herself fitting in with the group and wonder of wonders, she enjoys it. As her friendship with those in the group strengthens, she really finds that it's easier to face her erstwhile friends. And whilst she enjoys the gaming group's friendship she feels a bit self-conscious about hanging out with them. But being Jessie, she tackles things head on and before long, you are nodding and laughing and agreeing with her actions and the general hilarity.

If I gave starts to books I'd give this four and a half out of five. Why not a full five? I would have liked for it to be longer. I didn't want to say goodbye to Jessie and her friends and especially her family. Her family is so excellent - too often we see family pushed aside in teen novels, but in Wild Nerd Yonder family is front and centre and alarmingly frank and hilariously honest and cringe-makingly real.

I think ITWNY really does have to be on several Christmas wish-lists this year. I cannot remember the last time I read a novel and identified so strongly with a main character and just generally felt comfortable in the world the writer created for me to experience. Julie Halpern has done a great job putting me back there, in my awkward confusing teen years, but she does it with such humour and honesty, that it makes you forget all the rubbish bits you went through growing up.

Very highly recommended. Into the Wild Nerd Yonder is published by Square Fish in the US. Find Julie Halpern's website here.
Who wrote this? Liz at 8:29 am

Email ThisBlogThis!Share to TwitterShare to FacebookShare to Pinterest
Labels: julie halpern, ya

I do like the sound of this one and the main character sounds fabulous.

Oooh. This sounds great fun. May I borrow it at Christymas, please? Please? And can I be in your gang? ;)

Great review, you've got me so excited for this book :D

I just added this to my shopping basket :D
I remember wanting to read it in Foyles but now I feel my life wouldn't be complete if I spent another day without having read it!
Sounds ace :)

Ohhh I like the sound of this one - even more with the punks & music <3
I think I am going to have to add it to my list ;D

Ooh. I'd vaguely heard of this title before but didn't really know much about it! Now I really want to read it. Hurrah for nerdy girls like us :)