To Die For by Linda Howard 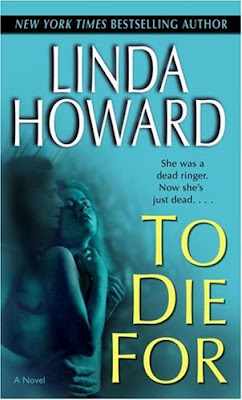 Here is the blurb from amazon:

After a painful divorce, Blair Mallory follows a dream and opens a health club. But Nicole Goodwin, a troubled member of the club, develops a strange fixation on Blair, imitating her style and dress, even the car she drives. Then Nicole is gunned down in the club's parking lot. And Blair is the only witness to the murder. At first the police investigation concentrates on Nicole and her acquaintances, but then someone tampers with Blair's car, and sabotages her home and business. The police - including Blair's old flame Lieutenant Wyatt Bloodsworth - are baffled because these attempts, while serious, are very different in tone from Nicole's murder. Is Nicole's killer seeking to remove a troublesome witness? Or was Blair the intended victim after all?
'To Die For' is probably one of my favourite Linda Howard books. I LOVE Blair Mallory! She is blonde, an ex-cheerleader and has an amazing body. She is the woman you'd love to hate. And she makes me laugh like few other characters. She totally looks like the dumb little blonde, but she is smart, knows exactly what she wants and how to get it.
When shots are fired at her and her old flame Wyatt Bloodsworth comes back into her life, SPARKS (the capitals are on purpose) start to fly. Wyatt hurt Blair when, after three dates, he just disappeared and never called again, despite their chemistry being blatantly obvious. Now, Blair decided she'll not give him another chance to hurt her, and the way she's giving him the runaround is hilarious. Blair narrates the story and her inner musings and plans on how to make sure Wyatt does what she wants him to do while at the same time having her revenge, put a big grin on my face. And let's not get started on the lists of Wyatt's transgressions...sorry, you'll have to read yourself.
Of course there is also the fact that somebody is trying to kill Blair, so you have a mystery that has everybody running into dead ends, fast-paced, take-your-breath-away action combined with a hot, jump-of-the-page romance.
I don't know how many times I've read 'To Die For' and it still makes me laugh. I'd love to be Blair and, well, I wouldn't kick Wyatt out of the bedroom either;D.
In the UK 'To Die For' is published by Piatkus. Linda doesn't have a website. The sequel is called 'Drop Dead Gorgeous' and continues the theme of hot, sexy romance and fast-paced action in a very satisfying manner.
Who wrote this? Tina at 1:08 am

Email ThisBlogThis!Share to TwitterShare to FacebookShare to Pinterest
Labels: linda howard, piatkus, to die for