When I fall for a writer, with a backlist, I tend to fall hard.  It happened with John Connolly the last time in a big way.  I could not read enough John Connolly.  I scooped loads of his books up and stuffed them into my head.  Now I'm on a tiny sabatical before I burn out on Connolly.

Then, a few weeks ago, I discovered this South African crimey thriller writer, Dean Meyer.  I read an interview with him hosted by a fellow review blogger here in the UK.  I liked his honesty and I thought his books sounded interesting.  Set in SA, where I'm from, I was intrigued to read what he'd done, having not been "home" for several years myself.  I thought I would have a decent distance to judge adequately how a foreigner would read the books, or rather, someone who's never been to South Africa and only knew of it as the place that gave birth to Apartheid, the place Mandela was locked away in and all the trouble with the ANC and the place where lions walk the streets.  (Sorry, I had to put that in there: if I had a pound for every time I was asked this question or one similar, I'd be able to dine out at Claridges at least three times a year). 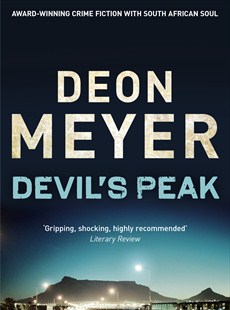 I bought in two titles to read by Deon Meyer.  The first was Devil's Peak.  It's the first part of an ongoing series featuring a Cape Town police detective called Benny Griessel. This is the write-up nabbed from Amazon:

The former freedom fighter known as 'Tiny' has finally achieved his dream of a peaceful life. But then his beloved son is taken away from him. In that moment, he unleashes himself upon a corrupt South Africa. His victims are those guilty of crimes against children.

He goes by the name of Artemis.

Benny Griessel, a fading policeman on the brink of losing his job, family and self-respect, is assigned the case. Benny knows that this is his last chance - both his career and the safety of Cape Town are on the line.

But then Benny meets Christine, a young mother working as a prostitute, and something happens that is so terrifying that the world will never be the same again for Benny, for Christine, or for Tiny.

Within a few pages I was fully immersed in the world created by Meyer.  I felt so much empathy for this freedom fighter called Tiny because Meyer took great care to produce a well rounded, interesting, conflicted character.  Let's be clear here: this surprised me, as I remember the fears we had growing up about these freedom fighters, these boys and men who would kill and destroy and burn homes and schools and innocent people in order to get the point across. The old adage of: someone's freedom fighter is another person's terrorist, is an adage I grew up with.  For Meyer to take someone whom I thought of as the "enemy" growing up in SA and making him an character I have so much empathy for, turning him into an actual living breathing person, not just a faceless frightening person, making him someone I cared deeply about, is testament to Meyer's skill as an author.

Tiny is supposed to be the antagonist in Devil's Peak but he's also the hero - in my opinion, he is. His character development is handled with such skill and everything he did you believed in.  His motivations were clear and you are with him every step of the way as he goes through his various "kills".  I sobbed my eyes out a few times - thank heavens for waterproof mascara, Mr. Meyer!

Onto Benny Griessell.  What a complete fuck-up of a main character.  Benny is basically a victim of his own abuse.  And I utterly loved him for it. He is messed up, and piteous and whiny and so completely self-absorbed that it takes him most of the book to realise exactly how badly he has screwed up his life.  His wife kicks him out because he's a drunkard and she's had enough.  He tries to stop drinking and goes through this whole period of withdrawal.   His boss (Mat Joubert) gives him a talking to that made me crow with laughter and admiration because I could hear it so clearly spoken in my head.  The dressing down Benny gets, the complete telling off is worthy of an award in itself.  I kinda wish I was clever enough to scan that speech in to copy it in here, but I actually read it out to Mark and we both collapsed laughing at it because of it's sheer brilliance.  Needless to say: tough love is strong and living well in Deon Meyer's writing.

And through all of this, Benny's been tasked to track down Tiny and to stop him.  Tied in with all of this (makes big hand gestures) we've got a young woman named Christine telling her story to a hapless priest somewhere in South Africa.  Somehow her story is connected to all of this and as the narrative moves ahead it becomes more and more clear how it fits in with Benny and Tiny's story.

I have feelings about this book, about the writing, the settings, the people, the author.  And it's kinda canted over into being wholeheartedly smitten with the entire package, reader, I won't lie.  The book has shown me what a good writer can do, like John Connolly's novels: it makes you believe in characters who have dubious morals and it makes you love them, just a little bit, and care about them and how things work out for them ultimately.

Standing back from my obvious infatuation, I would say that as a "foreigner" some aspects would seem difficult to understand but only initially because everything is within context.  Meyer never shies from writing honestly about corruption and the harsh realities of living and working in South Africa.  It's a very real world, inhabited by people of all colours and creeds and to Meyer's credit, he doesn't hold back or rather, to me it doesn't seem like he's holding back and he gives us the full scope of life on the force, the difficulties, the politics, the realities.  I also think that Meyer's got an incredible eye for detail and his observations and commentary hits home.  It made me smile wryly and nod and it shocked me too - racism is still there, but not in the way most people would expect.  But then, there's also friendships and compassion that transcends gender and race and that's incredibly important to point out to first time readers too, I think.

I'd also like to do a shout-out to Mr. Meyer's translator as he writes the books in Afrikaans and it is then translated into English (and various other languages) which in itself is incredible as although I'm supposed to be Afrikaans and can understand it really well, trying to speak it, nevermind translating it, blows my mind.  Stupidly, I didn't make a note of who the translator is and I'm sorry, but really, they have done an amazing job because the writing flows beautifully and there is a lyricism to the prose when it comes to describing the characters' emotions but also the beauty and realities of this world, that gives me shivers.  It shows that Mr. Meyer and his translator must work very closely on keeping the integrity of each book.

I went straight from reading Devil's Peak into the second Benny Griessell novel: Thirteen Hours.  Which, although it's still a Benny Griessell novel, is completely different to the first novel which was a very intimate character study of two very different men and a tormented woman, set against a backdrop of a country still struggling to make sense of the big issues that face them.  I'll review Thirteen Hours next week but basically: you'd be a fool not to want to read it.  My third Deon Meyer title should be delivered in the next few days and I can't wait to read it - it's not a Benny Griessell novel, but a standalone, and I can't wait to indulge.
Who wrote this? Liz at 8:00 am

This is a very good book! I've read it twice, it's just that good! I bought a copy at a discount books website online. It was a really good buy especially for such a good book.