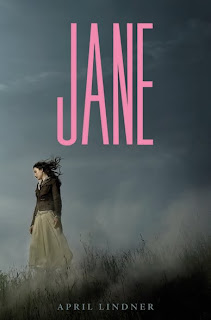 Synopsis
Forced to drop out of an esteemed East Coast college after the sudden death of her parents, Jane Moore takes a nanny job at Thornfield Park, the estate of Nico Rathburn, a world-famous rock star on the brink of a huge comeback. Practical and independent, Jane reluctantly becomes entranced by her magnetic and brooding employer and finds herself in the midst of a forbidden romance.

But there's a mystery at Thornfield, and Jane's much-envied relationship with Nico is soon tested by an agonizing secret from his past. Torn between her feelings for Nico and his fateful secret, Jane must decide: Does being true to herself mean giving up on true love?

An irresistible romance interwoven with a darkly engrossing mystery, this contemporary retelling of the beloved classic Jane Eyre promises to enchant a new generation of readers.
I was mooching around the YA shelves of Foyles recently with Liz when I saw this book with its gorgeous cover and those lovely deckle page edges that you sometimes see. Curious, I snatched it up to find out more. It's a modern take on Jane Eyre which I was initially a little dubious about. It's not that I don't think there's room for this kind of adaptation but that it isn't my favourite of the Bronte sister's work. However, after a little more mooching about I found I couldn't put this book down so read the first page or so to get a feel for it. Lindner's writing is quite hypnotic, written in the first person I found I was instantly drawn to the voice of this modern-day Jane.
I was curious to see how the character of the self-contained Jane would translate into the body of a girl in 2011. Would it be believable? Would her choices work? How would the author manage to make Jane modern? Our heroine describes herself as detached and finds it difficult to show her emotions. She's instantly passed over by her mother for her prettier, more outgoing sister. Although her father shows her some affection it's easy to see how she could become so withdrawn. Once she's orphaned she finds that both her sister and brother care little about her welfare so she resorts to finding work as a nanny as she can no-longer afford her college fees. Jane loves classical music and isn't interested in gossip magazines or (I'm guessing) E! News. For this very reason she's picked to be a nanny to rock star Nico's daughter and finds herself heading off to his mansion in Connecticut.
From this point on, although the story was familiar to me I found myself drawn in to Jane's world. Although she is quite withdrawn there's a warmth to her personality that reaches beyond her self-deprecation and lack of experience. She's blunt and forthright with her views and this cuts through all of Nico's ego. Nico is the perfect male lead; a bad boy turned good with a massive secret. He's so used to everyone agreeing with his every word that I could easily believe that he'd be attracted to Jane's simple honesty. Even the age difference between them doesn't feel inappropriate. Jane never drinks as she's only nineteen and she's so level headed that I never questioned her choices.
I loved reading Jane. Everything about it was massively satisfying. As the book progresses she gradually learns more about herself, her siblings and her feelings for Nico. Although Jane hasn't been published in the UK yet it's freely available online so get hold of a copy of the gorgeous hardback whilst you can.
Who wrote this? Essjay at 8:00 am

OMG Sarah I want it now. Jane Eyre is one of my favourite books ever. I am off to look for this one. Thanks for the great review

ARgh! Totally jealous of you reading this now - it sounds really great and that cover is so wonderful. You chose wisely! :-D

Ooh I want to read this one. Carla nabbed the only copy from Foyles on Monday, so I will await her verdict. Glad you enjoyed it!

Oh my word. I completely agree with your review. I adored this retelling and the writing really was hypnotic, wasn't it? I couldn't put it down and I admired this Jane so much. Also impossible not to <3 Nico. ;)

I read this book last November and I loved it.
I think April Linder picked up the right parts to base her story on, but made the story her own.

Yeah, it was a bit familiar but different at the same time :D

I also really enjoyed this book. It's just a fun, romantic afternoon read.

Great review. I liked this one too - I was worried for a bit about Jane's youth compared to Nico's rock star ways, but I was convinced.

AHHH! I'm so desperate to read this one now!