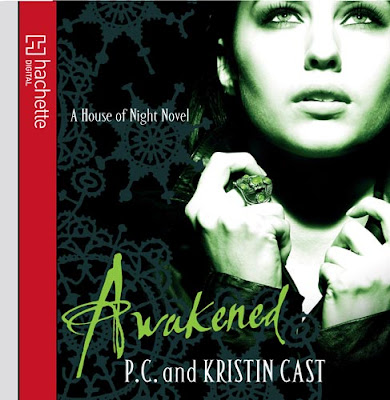 Exonerated by the Vampyre High Council and returned to her position of High Priestess at Tulsa's House of Night, Neferet has sworn vengeance on Zoey. But Zoey has found sanctuary on the Isle of Skye and is being groomed by Queen Sgiach to take over for her there. Being Queen would be cool, wouldn't it?


And what about Stevie Rae and Rephraim? The Raven Mocker refuses to be used against Stevie Rae, but what choice does he have when no one in the entire world, including Zoey, would be ok with their relationship? Does he betray his father or his heart?

I received this in some time ago in Feb and as I personally do not get along with audiobooks I asked on twitter if anyone would like this and a friend of mine, Kenneth immediately said yes! I grilled him to find out if he even knew that this was a teen novel and in the paranormal romance catergory.  I totally got slapped down by Kenneth as he was an avid fan of the books.  That will teach me to pigeon hole my mates!

Subsequently I thought: hey, let's get Kenneth to review this one, and he has.  In his own words:


**minor spoilers alert**
It's been a few years now since I stumbled upon the house of night books by P.C. Cast & Kristen Cast and I am glad that I did!

So there I was going through the Audible UK website having credits to use and I stumbled upon the first and second books in the “House Of Night” books and I was hooked.

The way the characters are written realistically and unpretentiously was a breath of fresh air to me, the way that these characters may not like each other and in some case hate each other whilst still being grounded in a world that is recognisable as our own was inspired in my opinion.

(I am an avid tweeter (@kennethwilsonuk if you wish to follow I would love to hear from you.)

Anyway I was on twitter a few weeks back and the Blog-Mistress of Doom (Liz: this is now my official title, people!) aka ( @Lizuk ) {whom is lovely!} ran a competition to her followers with a the first to tweet back who wants to win a copy of the new (HON) audiobook so I tweeted back I did and was lucky to be the first.... though not the only one and with some chuckling on my part I had to prove that I knew about the world of Zoe Redbird & Nyx & Aphrodite; which I did and I was sent the latest book as the prize.

AWAKENED is the 8th book in the House of night series and picks up like all but the first one immediately after events of the previous book BURNED.

We find Zoe and Stark are on Skye recuperating after their epic adventures of Burned and while Zoe is trying to feel whole again after having her soul fragmented and then put back together again, Neferet is up to her no good deeds as always and delves further and further into the darkness that’s been consuming her since the beginning of the series and this descent forms a big part of Awakened!

The said name of the book is multi layered as well and throughout the book these Awakenings become apparent: some are balls out obvious and some are very metaphysical in nature. I was also impressed by the writers and their commitment to their mystical aspects of the world they set up for the series, where pagan and Native American cultures and beliefs combine to be something believable. Thus far, in the whole series I have never questioned what is and what isn’t real in this world - as an agnostic myself that’s an impressive feat I think.

Also, the writers deserve applause for not shying away from issues of sexuality and death, especially the lengths that Neferet goes to, to lure Zoe back from Scotland to Tulsa. What Neferet does to Jack is awful but the way it backfires on her is great - it was a powerful bit of writing.

The way that the book continues the ever more important Stevie Rae branch of the House of Night part of the tale is more and more enjoyable with every book and I look forward to what happens with her and the red vampires and Rephraim in the future.

If there are any negatives about the book it’s that at times there is some story telling problems with the back and fro of the characters but this has been the case since the beginning and doesn’t really take away from the book(s) in general.

The other issue I had was with the narrators “attempt” at Scottish brogue was terrible and each time I heard it was pulled out of the story as I was laughing my ass off. Sadly I don’t think this was intended by the authors as the dialog is perfectly realistic Scottish and if you get this as the audio book be prepared to laugh at those bits but as they are mainly kept to the first quarter of the book then it’s forgivable.


***
Thanks Kenneth for an awesome and honest review.  Awakened, both the actual physical novel and the audiobook, is out now to buy online / real life shops.
Who wrote this? Liz at 8:29 am

What a fantastic review. I don't generally do audio books but I might give this one a go just to listen to the attempted scottish accent.
Love the new twitter ID Liz *sniggers*