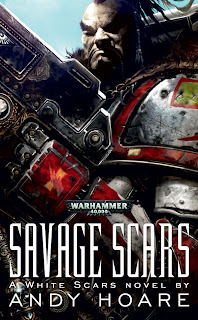 Dal’yth. The forces of the Greater Good have established a stranglehold on the planet, and the time has come for the Imperium to move against them. The White Scars lead the ground assault against the tau, launching into combat with speed and fury, shedding blood as they gain ground against their enemies. Meanwhile, the members of the Crusade Council are determined to pursue their own agendas, and their politicking and back-stabbing will place the entire war effort in jeopardy. But little do they know that Inquisitor Grand has more extreme measures in mind, and the White Scars must achieve victory quickly or the cost to Dal’yth will be devastating.

I had been meaning to read something else when I wandered over to our long suffering bookshelves, but then I glimpsed that cover, and suddenly I was reading Savage Scars instead. Of course, a cool cover only goes so far. If the writing’s not up to scratch the shiniest cover in the world isn’t worth feth all.

So young Mr Hoare is twice blessed- a cool cover, and the ability to put a damn fine book together. ‘Scars has a very down to earth feel about. The characters are still larger than life, but the action feels nice and gritty, and suitably deadly. Firefights aren’t entered into for the hell of it; they’re treated like the military operations they’re supposed to be, each side testing for the other's weaknesses, and exploiting them. The Tau feel like the Tau: their tactics and weapons are consistent with the background, and they’re not just there as something for the Marines to kill. The contrast between their mentality approach and the inexorable ferocity that typifies the Space Marines is starkly and evocatively portrayed.

The lead character, Sarik of the White Scars, is a pragmatic and cunning veteran, and by slowly fleshing his character out Andy also builds up the image of the Chapter as a whole without having to be too obvious about it. Likewise, his treatment of the Crusade Council and their internecine squabbling is done in a series of broad brushstrokes that fills in the gaps without detracting from the thrill of the action, building up a real sense of the political maneuvering and bureaucracy that threatens everything the men on the ground have risked, or given, their lives for.

There are various threads which run through the novel, pulling the three main components together, and these are nicely balanced out and work together to engender a sense of urgency and tension. My only gripe would be about the Inquisitor- I won’t give any spoilers away here but it would have been nice if his motivations and background were fleshed out a bit more, so that you had a better grip on the question of why. Still, it’s a minor whinge and it certainly didn’t detract from my enjoyment of ‘Scars.

Job’s a good ‘un! I demand more!You can read an excerpt here and watch the trailer here.