The Enchantment Emporium by Tanya Huff 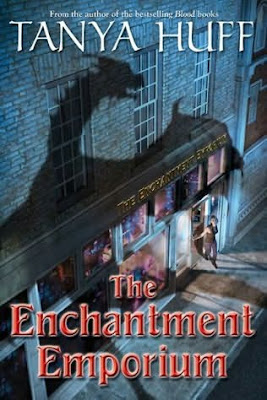 The Gale family can change the world with the charms they cast, and they like to keep this in the family. Alysha Gale is tired of having all her aunts try to run her life, both personally and magically. So when the letter from her Gran arrives willing her a "junk" shop in Calgary, Alysha jumps at the chance. It isn't until she gets there that she realizes her customers are fey. And no one told her there's trouble brewing in Calgary-trouble so big that even calling in the family may not save the day...


For some time, this book kept popping up everywhere. In my Amazon recommends, in the various shops I went in to. Eventually I succumbed towards the end of last year and bought it. I can say, with my hand on my heart, that it has become one of my all time favourite urban fantasy novels.

If I could, I’d force Tanya Huff to write more books in this world. Although, having googled it, it looks like we may be in store for another one, a sequel. I am so excited I may faint.

But, before I do, on to the review.

Most of us have families, with aunts and uncles and cousins and whatnot. But no one has family like Allie Gale. Firstly, we aren’t ever entirely sure they are even 100% human. Looking at the family, they are very witchy. There are various rituals and steeped in lore and magical elements. The men are kept close and then there are the aunties who to my mind are very similar to the aunties in Native American folklore – where they are these truly powerful god-like creatures spinning and weaving our skein.

When we meet Allie she is jobless, homeless and pretty much friendless. So she’s moved back in with her family. Allie receives a letter from her Nan who has broken away from the claustrophobic confines of the larger Gale family to do her own thing. The letter is quite short and abrupt stating that if she’s (Allie) reading it, her Nan was dead and that she is inheriting a shop and building in Calgery in Canada. Much is made of this letter as the aunties do not think Allie’s Nan is dead – she is afterall one of the Aunties and they would know such a thing.

Allie travels to Calgary and finds The Enchantment Emporium her Nan’s left her. She has no real clue what to do next. And the story really is about Allie finding her feet in the Emporium, meeting some of the customers and oh, trying to figure out about why she’s been spotting dragons doing a fly-over the emporium since she arrived. What are they doing here in our world and where are they coming from? There is also the question as to why her Nan was running what is basically a junk shop. And why is it so important to the local community? As the story comes together and we watch Allie grow from a slightly depressed, mild-mannered and possibly lost individual, to a powerful, confident young woman and magic user, and we notice how people’s reactions change towards her is so great.

The Gale family is impossible to explain within the review. I know I for one was slightly taken aback by their cavalier attitude towards sex and partners within the family. But then, I reminded myself throughout the novel that I am probably not reading about beings that are entirely human, so they do possibly operate on a different level to us “norms”.

The magic system is complicated and as far as I can tell, based on a combination of nature magic combined with some elements of sex magic and a smattering of intent/sorcerous type stuff. It may not be everyone’s cup of tea but if you fully expect a LKH novel, walk away as this is not it. Yes, there are some steamy and some wonderfully vivid implied scenes but there is nothing full on and too overtly in your face. I enjoy a well written sex scene as much as anyone else but do draw the line at gratuitous and over the top for the sake of shock.

So Enchantment Emporium has a lot going on. We are introduced to a great many secondary and tertiary characters but none of them are as strong or well-defined as Allie, which is great. The secondary characters I also quite liked as they all seemed to get on and do their own thing in the background and they weren’t ever static, only coming to life when the main character needed them.

Also, there are a lot of pop references and my favourite has to be straight out of the Supernatural tv show, when Sam Winchester tries to change the channel / 8-track Dean is playing in the car and Dean pipes up with: “House rules, Sammy. Driver picks the music, shotgun shuts his cake hole.” I loved this. Huff also mentions a great many other things, including the Dresden Files which had me crowing with laughter.

I am deeply intrigued by the Gales and really can’t wait to indulge in more of their world. The Enchantment Emporium was published back in 2009 by DAW Books over in the States. I picked up my copy from Forbidden Planet in London before my book buying ban at the end of last year.

So, I’ve tried not to give too many spoilers in this one, but here, over at this site, is a more in depth review including a great list of other pop culture references.
Who wrote this? Liz at 8:23 am

I don't know whetehr to thank you for making me want this one or curse you. I am so curious about it now. the premise sounds quite unique. Amazing review - dash it off to add to my never ending wishlist :D

This sounds a bit Diana Wynne Jones-y - is it? I love the cover!

You are too bewitching with these books. Now I want this one too. What are you doing to me. LOL