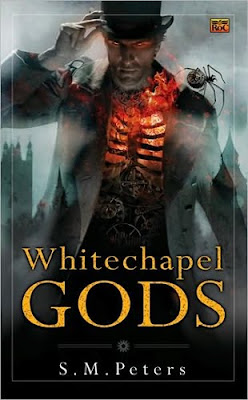 In Victorian London, the Whitechapel section has been cut off, enclosed by an impassable wall, and is now ruled by two mysterious mechanical gods. Mama Engine is the goddess of sentiment, a mother to her believers. Grandfather Clock represents logic and precision.

A few years have passed since the Uprising, when humans fought the gold cloaks, the black cloaks, and even the vicious Boiler men, the brutal police force responsible for keeping humans in check. Today, Whitechapel is a mechanized, steam-driven hell. But a few brave veterans of the Uprising have formed a new resistance, and they are gathering for another attack. For now they have a secret weapon that may finally free them... or kill them all.

Firstly, I confess to being seduced on sight by the cover of Whitechapel Gods- a very tasty bit of art.

As the name suggests, the action takes place in Whitechapel, tucked away in a Victorian, Steampunk London, albeit a dystopian version thereof. It’s a world under the dominion of two mechanical gods, Mama Engine and Grandfather Clock, who rule with an iron fist in every sense of the word, using the ruthless brass and iron cyborgs known as the Boiler Men to carry out their bidding. Choking smog blankets Whitechapel, carrying with it mutagens that can cause cancer-like growths of metal and wire to manifest in their victims. It’s a bleak and unforgiving setting, where not even death can offer a respite from the unremitting horror.

It’s an interesting premise, and one I was keen to explore. However, things don’t always turn out the way you want them to. My enjoyment of the vigorously paced story was undermined by a few things- there are a lot of voices trying to be heard in W.G, as the viewpoint shifts to various characters throughout. It’s a device which I think falls short of what was intended to bring to the story, and made it difficult to figure out which voice I was supposed to be listening to. Then there’s the powerful imagery that’s woven through the story; this is not usually a bad thing, but being reminded of the bleakness of the setting in every other passage takes it to the point of distraction and verges on overpowering.

There are several questions which beg to be asked- when did this start? how? what’s happened to the rest of England? but the answers are only hinted at in the vaguest of terms, which is a pity as it would have filled in a lot of blanks and stiffened the inherent structure.

There’s so much potential here, but it just missed the mark for me, which is a real pity as I desperately wanted to like this. It’s certainly the product of a rich and fertile imagination and I hope we’ll be seeing more from Peters in the near future.
Who wrote this? Mark at 6:48 pm

I rarely find an author that can do shifting POVs really well. The premise sounds great for this though so I'll look out for it. And that cover! Amazing.

Thanks for the review

Thanks - I look forward to hearing what you made of it.

Funny, I was just about to pick this one off my TBR pile.

I'm with you on the cover--enticing stuff.

It's too bad you didn't care for the story as much, though. It's still on my wish list, and hopefully my reaction won't be as tepid. Then again, your reviews tend to be on the mark.

I read the book some time ago and fully agree with your good review. Hopefully there will be more books by S. M. Peters.
It is always sad when you really want to like a book but you can't.

Anyway the cover is a gorgeous eye-catcher.