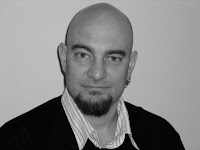 Lou and I have been chatting on and off for a while now, especially after I irrevocably fell in love with Matthew Sturges's novel: Midwinter. I convinced Lou to do an interview with us, which sort of became more of a guest blog, to be honest.

But, I'll rather let Lou tell you in his own words (with a few prompts from me:

How did Pyr come about?

The parent company, Prometheus Books, who incidentally have just celebrated their 40th birthday, wanted to get into fiction. As nonfiction publishers of a great deal of science, nature and philosophy texts, and long time friends of the late Isaac Asimov, Sir Arthur C Clarke, and Carl Sagan, they thought that science fiction would be a good match. They approached me in March of 2004 (I had been making a name for myself as a freelance anthology editor), and I came on board as the Editorial Director of Pyr (the name is the Greek word for "fire" and thus, a wonderful fit with the parent company's name and purpose).

We began by publishing about sixteen novels a year, mostly hardcover, mostly SF. Over the last four and a half years, we've transitioned into publishing mostly fantasy, mostly in trade paperback, and in the past year moved into both mass market paperbacks and ebooks. And the reception from the SF&F community has been tremendous. We hear continually from readers that they come to us when they want "more engrossing reads" and that while there isn't one subgenre or tone we specialize in, we nonetheless have a "brand-identity" of publishing higher quality books. We've heard this from readers, distributors, independent bookstores, and chain store buyers.

We are also frequently called out for the quality of our book covers (three were on the Chesley ballot this past summer, as was I as Art Director). We are also thrilled to have been on the Hugo ballot six times now in less than five years - once for novel, once for novelette, once for novella, and three times in the new Best Editor-Long Form category. So, basically, by the time we turn five this coming March, it will have already been a hell of a ride. 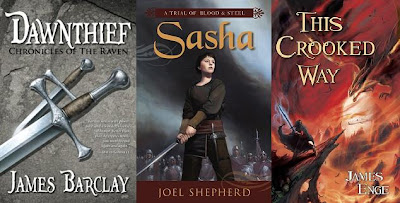 What exciting things are Pyr up to at the moment?

Currently, we are up to about 28 books a year, with the freedom to go beyond this when/if we can, and making a name for ourselves as a great place to read the "new, gritty fantasy" among other genres.

We're having a lot of success with authors like Joe Abercrombie, Tom Lloyd, and James Barclay in this area, as well as with urban fantasy authors like Justina Robson and Mark Chadbourn. Lately, I've been acquiring titles that I am thinking of as "post-steampunk," or rather, steampunk that has migrated out of Victorian settings into fantasy, urban fantasy, and other alternate historical settings. We'll have books in this category out in 2010 from Adrian Tchaikovsky, Mike Resick, Tim Akers, George Mann and the writing team of Clay and Susan Griffith.

What you are looking forward to in the future and can you tell us some gossip about your new and upcoming books?

Well, we've just come out with Paul McAuley's The Quiet War, a tremendous war/anti-war novel set a few hundred years from now and dealing with the conflicts between a Brazilian-led earth and the colonists around the moons of Saturn, as well as James Barclay's original Raven trilogy, making its US debut. We also have James Enge's This Crooked Way, the second of his (stand-alone but linked) novels about Morlock Ambrosius, son of Merlin, master of all magical makers, master swordsman, and bitterly dry drunk. This one is very, very much akin to the early S&S of authors like Fritz Leiber, or even Michael Moorcock, so think "episodic novel," (or that dreaded word fix-up), rather than a big doorstopper epic. But if you are a fan of Howard, Lieber, Moorcock, Moore, etc... this is the book for you.

On it's heels, we have Joel Shepherd's Sasha, the first in his A Trial of Blood & Steel quartet, a gritty, realistic fantasy that is steeped in politics and features a believably-invincible female protagonist. I say believably-invincible because she has studied a sort of swordsman's martial art (think Zen warrior monks) and brought it back to a culture still fighting with broadswords, so she's able to use momentum in a way no one around her can. But she's not Buffy. Her power is very grounded in what someone could *and could not* realistically accomplish, and as such I think she's a very important offering to a genre full of magically-empowered heroines.

We also have Mark Chadbourn's new Swords of Albion book, The Silver Skull, which is the first of his Elizabethean Spy novels featuring Will Swyfte, the Queen's front line of attack in the Cold War England finds itself in with Faerie. If you think Susanna Clarke meets Ian Fleming meets Patrick O'Brian, you aren't far wrong.
Let us know what you do and how you manage to do what you do i.e. blog, twitter, Pyr job, etc. without collapsing into a bundle of nerves.

I wish I knew. I'm pretty much running on all cylinders now, burning the candle at both ends, etc... Prometheus is a roughly 40 person company, and probably about 30 of them input in varying degrees in the production and distribution of every Pyr title, but I still do a hell of a lot of overseeing (as well as being the only one reading, acquiring, and art directing). These days, my job seems to divide into public speaking/online interviews (such as this and thank you very much) and pushing emails back and forth between departments. Actual reading ends up occupying a tiny corner of the day!
Which reminds me, I should be off...
**
Thanks stacks and bundles to Lou for taking time to chat to us. I'd like to point out the following link - http://www.pyrsf.com/SampleChapters.html - which is their Pyr Sample Chapters Blog and to be honest (and mercenary) aspiring writers can do worse than pop by there to check out how it's done.
Find out more about the SuperHuman Lou Anders and Pyr SF here www.pyrsf.com
and here www.louanders.com .
Who wrote this? Liz at 3:52 pm