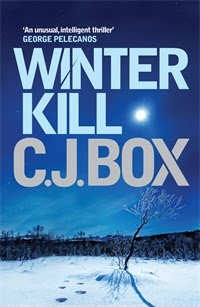 In Winterkill, Joe Pickett is a game warden in a remote part of Wyoming, but more importantly, he's a family man and home is where he'd rather be than anywhere else. In this third Joe Pickett novel by C. J. Box, Joe finds a herd of elk slaughtered, and when he finds the perpetrator of that crime, it turns out to be the district supervisor of the National Forest, who is then found murdered. At the same time, a group of Waco and Ruby Ridge survivors calling themselves the Sovereign Citizens set up a permanent camp in the National Forest. Among them is the mother of Joe Pickett's youngest girl, a foster child abandoned three years ago. The tension mounts as Washington bureaucrats arrive to evict the Sovereign Citizens, by force if necessary, Joe becomes convinced that wrong man has been arrested for the murder, his foster daughter is kidnapped by her mother, and a killer blizzard is bearing down on the forest. This write-up was taken from here - as it seemed a more comprehensive reflection of what the book is about.


The UK is some while behind the US as they've had the opportunity to read CJ Box's books since around 2002.  It is thanks to Corvus, here in the UK, that we are now getting the chance to catch up with Mr. Box's books.

I read Winterkill within a few sittings.  What drew me to the story was the main character, Joe Pickett.  Joe is such a great character with a strong moral compass and a spidey-sense that he tends to follow, regardless of the consequences.  What I liked even more about Joe is that although he has this integral good guy attitude which in theory should have made him a lonely hero-type, Mr. Box has taken that and swung it around, having Joe rely hheavily on his wife Marybeth for advice and guidance.  Marybeth herself is a fantastically wrought character and you have a sense that she can withstand an onslaught from practically anything.  Yet, Box manages to keep both his characters very human, with failings, doubt and anger just under the surface.


**very minor spoilers**
But I am getting carried away here.  My review for Winterkill is basically this: when Joe is faced with the awful murder of an escaped suspect, Lamar Gardner (the guy got shot full of hunting arrows), within minutes of the suspect escaping from his truck (having locked Joe in the truck by handcuffing him to the steering wheel) whilst a storm is moving in, Joe has few choices. Leaving him in the cold and snow would mean that any of the scavengers would get to him so he lifts the man and carries him back to the truck, through the storm and drives him to the hospital.  He also reports the incident to the local sheriff who accuses him of (obviously) tampering with evidence.  Joe points out that he'd rather bring the man in to hospital, than leave him to the mercy of the storm and scavengers.  This shuts the sheriff up pretty promptly.

They are due to set off to with some deputies and various other law enforcement types the next day, but the storm moves in quite heavily and scuppers the plans. By the time things are clear enough for them to go to the site of the murder, with a certain Melinda Strickland in tow.  Strickland is one of the nastiest pieces of bureaucrats I have ever had the honour to read about.  She is a high ranking Forest Service official and is so cold, heartless and brutal, that I really did wish someone would just punch her lights out permanently.  She, of course, makes Joe's life utter hell.

The investigation that follows into Lamar's death spirals out of control as Strickland sees enemies where there are none and through her sheer force of will creates a nightmare for all concerned.  A group of people, refugees, if you can call them that, from some of the most high profile stand-offs between authorities and citizens (think Waco survivors) move into a nearby campground and all they want, they say, is to be left alone.  Joe visits them, to suss out what they are up to and he comes away with a sense that what these people are saying is true.  They literally just want to be left alone to see through winter and then maybe move along.  They call themselves the Sovereign Citizens and although Joe believes them, he doesn't think for a moment that they are all innocent.

It also transpires that the Sovereigns have in their midst, the birth-mother of April, Joe and Marybeth's foster-daughter.  And by all counts, this woman wants April back.

When things go pear-shaped, April is taken by her mother and the authorities move in to try and evict the Sovereigns from the campground, Joe is left with some truly awful decisions to make.  The authorities are convinced that the murderer of Lamar Gardner is sheltering with the Sovereigns, which means that Joe has to act to prove them wrong, in the vain hope that they will not attack the Sovereign camp.

It literally becomes a race against time.  Joe's character is pushed to the limits here and even though you will him to throw his law abiding citizen persona to the wind, you know that once he does, nothing will be able to bring him back from the edge.

I was on the edge of my seat.  I had no idea what was going to happen.  CJ Box kept proving to me that he was a skilled writer and that Joe's action were not to be taken for granted.

In the end, the very end, I closed the covers and sat back with this huge tremendous sigh.  And no, it may not end the way you expected it to end, but wow, what you got for your ending was raw and honest and really pummelled you.

As this is the third Joe Pickett novel, and as it is very American, being set in Wyoming, it fully expects you to be au fait with guns and various laws pertaining to the Forest Services, including bits of hunting law.  It also assumes that the reader will know about Waco, Ruby Ridge and who the Freemen are.  Personally, this didn't bother me, in the least.  As a reader you can quite easily deduce what had taken place at these events and of course, you can always Google it. I mean, we all know and remember Waco, so it's easy enough to figure out what Ruby Ridge was about.  As Joe does everything in his power to stop the authorities turning Saddlestring into another recognisable name synonymous with death and horror.

CJ Box is a writers' writer.  His plotting is ridiculously well done and his characters lived and breathed whilst I read it.  The back story for those of us who did not know about the more intimate details of their lives (i.e. that their daughter April was not their own etc) is handled with care and never once did it feel like I was receiving info-dump.   I came to care for the community and I think I have a bit of a crush on both Marybeth and Joe for being such honest good people whom I want to be with.  So, I'm definitely signing up for the next Joe Pickett book to be read.  I am curious to see what else will happen in his life.  It may sound macabre, but it isn't really.

Find CJ Box's website here.  As I understand it, Corvus will be releasing a CJ Box novel a month, until we are caught up with the States.  This is great news.
Who wrote this? Liz at 8:09 am

I haven't heard of this series at all. Can this book be read as a standalone?

This definitely sounds like a good read. I don't think I've heard of the series before, but it sounds like its worth checking out. Thanks :)