The Good Thief's Guide to Venice by Chris Ewan 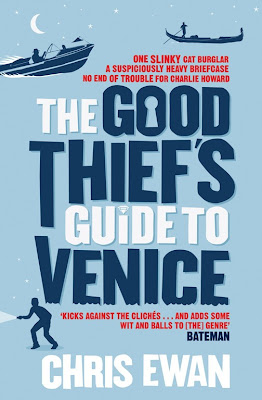 Charlie Howard - struggling crime-writer by day, talented thief by night, has gone straight. But holing himself up in a crumbling palazzo in Venice in an attempt to concentrate on his next novel hasn't got rid of the itch in his fingers. And to make matters worse, a striking Italian beauty has just broken into his apartment and made off with his most prized possession, leaving a puzzling calling card in its place.


It looks as though kicking the habit of a lifetime will be much more of a challenge than Charlie thought.


Sneaking out into Venice's maze of murky canals, Charlie’s attempts to tame a cat burglar embroil him in a plot that is far bigger and more explosive than he could ever have imagined.


**minor spoilers**
I love caper movies and caper books. So I was really pleased to be able to add another one to my shelves in the shape of Chris Ewan's fourth outing for crime writer and thief, Charlie Howard.

Charlie is holed up in Venice to work on his next novel. But his agent, Victoria, has decided that he needs an eye kept on him so she joins him and bunks in the guest bedroom. This also means she'll be at hand to read what he's done so far. Charlie fears he has performance problems when it comes to writing. Lying awake at night he hears the obvious sounds of someone sneaking around his apartment.

When it turns out that someone has broken into his apartment, Charlie is flumoxed. Who is this dastardly thief? When he confronts the thief he finds her to be an exceedingly lovely Italian girl with a penchant for telling him what to do.

Long story short: she steals Charlie's most prized possession and holds it to ransom. She wants Charlie to break into a palazo and leave a suitcase behind. Not quite what Charlie is used to but after some to-ing and fro-ing he agrees and barely escapes with his life as the case explodes, leaving him shaken and the palazzo itself quite badly torn apart.

Things just go weirder and crazier after that.

I thought that Charlie is such a great character. He is a bit of a prima donna, getting a bit hoity when someone else steals from him, and it made me grin. But I think he definitely sees himself as a gentleman thief and so it's okay for him to genteely nab something from someone else. Also, as I've not read any of the other stories in the past, I have no frame of reference about his other thefts and adentures, but I gather that he was good at what he does. Did do. Because don't you know it, he's decided to go straight.

His odd relationship with his agent Victoria really drove the story forward. They are like an old couple who are too wary of each other - there is some attraction but it is not quite out in the open. I also think Charlie is a bit of an innocent when it comes to women and how much they can lie and hide, like everyone else.

As Charlie and Victoria come up with outlandish schemes to save a count and get to the bottom of the whole deal with the other thief, they are lured to a casino where a high stakes blackjack game is ongoing. Victoria spots someone she knows at the gaming table and slowly the pieces fall into place.

The Good Thief's Guide to Venice is fun holiday reading and the perfect thing to lounge with in the sun. Even if the book takes place in a misty, drizzyly Venice. The action moves along at a cracking pace and the characters are well drawn. I am very keen to read the new one that Mr. Ewan is currently working on. I think he mentioned Berlin to me when I asked him via Twitter.

Find the author, Chris Ewan's website here. The Good Thief's Guide to Venice is out later this month from Simon & Schuster.
Who wrote this? Liz at 8:46 am