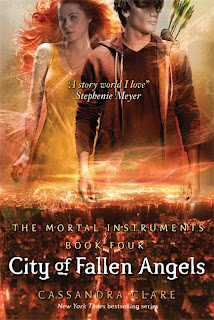 Synopsis
The Mortal War is over, and sixteen-year-old Clary Fray is back home in New York, excited about all the possibilities before her. She's training to become a Shadowhunter and – most importantly of all – she can finally call Jace her boyfriend. But nothing comes without a price. Someone is murdering the Shadowhunters who used to be in Valentine's Circle, provoking tensions between Downworlders and Shadowhunters that could lead to a second, bloody war. And when Jace begins to pull away from her without explaining why, Clary is forced to delve into the heart of a mystery whose solution reveals her worst nightmare: she herself has set in motion a terrible chain of events that could lead to her losing everything she loves. Even Jace.
I must start by saying that there will be spoilers for books one to three in the Mortal Instruments series in this review only because it's impossible not to do otherwise.
I unashamedly love this series. I remember walking into a bookshop one day desperate to find something to read as I'd left my book at home. I picked up City of Bones and was instantly transported to a queue outside a nightclub. Things have moved on for the Shadowhunters since that first book and the characters have been through a harrowing time. This book starts a few months after the events of City of Glass and everyone is adapting to the various changes in their circumstances. Alex is holidaying with Magnus (don't worry - they do appear later in the book), Clary and Jace are very much in love, Simon has become something of a babe magnet and is handling it with his usual lack of panache. I can't tell you how much I love Simon, although he's become a vampire he still struggles with the usual teenage insecurities. However, he's starting to face up to the fact that he can't continue as before and that he's going to have to embrace a new lifestyle sooner or later. The scenes with his mother are truly touching, so bittersweet.
However, the calm is short lived. Jace is having awful nightmares that are starting to affect his relationship with Clary. He starts to avoid her and even seeks out Simon who's having his own set of problems. Apart from his multiple girlfriend situation someone is hunting him down and eventually he's going to have to find out who wants him so desperately. The dialogue is as sharp and snappy as ever and there's a great new character in the form of Kyle who makes Simon a welcome offer in the form of a room in his apartment. For lovers of Clockwork Angel, one of the best characters from that book makes an appearance too.
Despite some genuinely funny and touching moments City of Fallen Angels also has its bleak and desperate passages. The stakes and tension are ramped up as Clary and Jace's initial happiness is short lived. The new troubles fit perfectly though into the larger series story arc and although Jace and Clary are really put through the ringer it's all entirely plausible. My only criticism would be that I would have loved more of Magnus and Simon. In all honestly though both of these characters could quite easily have their own series and I believe this is something that Cassandra Clare has considered. I hope it happens as Simon, the unwilling vampire, has so much to offer in my opinion. His struggle with his identity is perfect, if painful reading.
Cassandra Clare has a great Q & A article on her blog about CoFA. Don't go and check it out until you've finished the book! It's very interesting though and a must read for fans of the series.
Who wrote this? Essjay at 7:30 am

I loved this book! That is all.

Cassie keeps getting better and better. Can't wait for the next books.

Ooh - exciting - will check it out!