Vikings excite me because I admire them and their way of life. I envy their wanderlust and their bravery. After all, the Vikings became justly feared throughout Europe as the Hammer of the North. They sailed most of the North Atlantic, reached south to North Africa and east to Russia, Constantinople and the Middle East. They intrigue me because they seem on the one hand earthy and pragmatic, and on the other spiritual and incredibly creative. Even their whole ‘creation story’ is both wondrous and bizarre. They are a contradiction - characterized by a tremendous sense of chivalry but also by barbaric cruelty. As a deeply contradictory soul myself, I find their paradoxical nature fascinating. However, it is perhaps worth considering that these paradoxes may only be seen as such because we are viewing them through our own 21st century moral lens. To a Viking, slaughter and chivalry, art, faith and war were all just aspects of existence. No one aspect more or less remarkable or worthy of deep thought than another, but simply all just a part of life.

And yet, it is perhaps also true that they constructed their philosophical ideals, their belief system as a way of making sense of their existence and perhaps even of justifying their aggressive outlook. After all, their gods were warrior gods. Their heaven was a warrior heaven. For a Viking if you die well you’re a hero and you might just earn a place in Odin’s meadhall, Valhöll. There you’ll feast and drink with your dead mates and ancestors until Ragnarök, when you’ll fight beside the gods in the last battle. You believe that your fate is pre-determined. Your wyrd has already been spun by the Norns, those sisters of men’s past, present and future. So you’re free to take on terrible odds in battle or brave dangerous seas. If it’s not your time to die, you should be just fine. And afterwards you’re going to have a Hell of a story to tell.

Then there is making sense of the natural world around you. The crashing thunder must be Thor hurling his war hammer, Mjölnir, at the frost giants. The epic crack of a distant glacier is a frost giant’s baleful cry. A rainbow must surely be a bridge between the human world and the world of the gods.

Having said all this, I suspect most Vikings wore their faith fairly lightly. They were just too busy living their lives, seeking glory and riches, fame and recognition to worry too much about the tenets of a complex belief system. This is certainly the case for Sigurd, my favourite character from the RAVEN books. Yes, he respects the gods, but he also believes in himself first and foremost. There’s also a part of him, I believe, that enjoys spitting in the All-Father’s one eye. Sigurd dares to challenge the gods, perhaps because he knows how fickle they can be and he would rather not walk willingly into whatever ill fate awaits. Sigurd is a man who chooses his own path and this often put him at odds with Asgot who is forever trying to win the gods’ favour.

Their differences are what make my characters human. Their quirks and flaws help the reader identify with them. Raven’s inability to completely reconcile himself with Asgot’s wholesale bloodletting helps us sympathise with him. At times Raven is confused. He doesn’t know what to believe or how he should behave. He wants to fit in but he also strives to make sense of it all for himself. This makes him like us. And us like him. 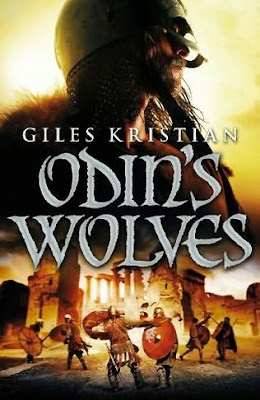 MFB are very pleased to be part of the Giles Kristian Blog Tour for Odin's Wolves.  I asked Giles to please write us something about the mythology of the world he's set his Raven books in and as usual, he's come up with the goods.


What I like about the Raven books is the fact that the characters are so recognisably human. They mess up, they fight, they love, they lose and they pick themselves up and carry on.  What I also like about the books is that Giles writes them.  This is quite obvious, I know, but what I mean is that he has this verve and enthusiasm for his writing that burns brightly.  As an aspiring writer and as a reader, that verve is so incredible to see and experience in real life, that it really inspires me.  And it also carries across into his writing.  His voice is so recognisable in these books that it sweeps the reader headlong into further adventures.  He is one of the writers where you seem to wake up from reading his books, by shaking your head physically and peering around you just to make sure you are not going to be smacked in the face by an axe or sword.

Odin's Wolves is the third in the Raven series of books and I do suggest you read them from the start as they are decidedly more-ish. My full review of Odin's Wolves will happen later this year when we host VIKING MONTH.

Giles is at Waterstones Leicester Market Street on Friday at 6:30 pm.  His next web appearance will be on Monday, 18th April at www.historytellers.co.uk.  Be sure to stop by there or track his movements down via his Facebook page: www.facebook.com/GilesKristian or his website: www.gileskristian.com.
Who wrote this? Liz at 10:39 am