Colin Mulhern chats to MFB about his favourite book 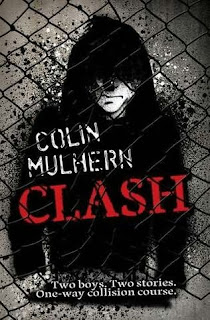 I had the opportunity to read Colin Mulhern's debut novel "Clash" from Catnip Publishers only last week but fell for the story and the writing in a big way. I picked up Clash at eleven on Saturday night before going to bed and by 1a.m. I had finished it. The strength of the writing and the two characters really blew my socks off.

My review is later this afternoon, but first, Colin chats to us about being a reluctant reader and subsequently finding that One Book to turn him into a reader and then, crucially, how that continued to evolve him into a writer.


***
A big hello to all the followers of MyFavouriteBooks! A great place to kick off my little blog tour, and a great subject to get the ball rolling because it took me a long, long time to find anything I’d describe as a favourite book.

I wasn’t much of a reader as a kid. I liked the idea of reading, and gave it a go, but I rarely finished anything, and when I did read, I was very slow. This will sound pretty strange, but even though I wasn’t a great reader, I always wanted to be a writer. I was always writing stories, just not really reading them. I used to buy the Pan Book of Horror Stories anthologies, but I’d stick to the shorter of the short stories. When I was 12 I discovered Fighting Fantasy books. These were incredible – game and story, with adventure, fantasy and horror all mixed up. But better than that, you didn’t have to read the whole book. Those managed to increase my reading ability, but I was still to find a novel that would hold me enough to get me through to the end.

The book that did it was The Six, by Janet Green. It was handed to me by my brother, who I never really thought of as someone who liked books. My brother was more of an outdoor type, kicking a ball about down near the garages. But here he was, recommending this book. It had a red-monochrome photo of a bunch of kids on the cover. He let me read a little then said I’d have to get it out of the school library as soon as he returned it.

I was a regular in the school library – not because I loved books, but because I didn’t like being outside at dinner times in the cold and drizzle. So long as you made it look like you were reading, you could go into the library. But, like I said, I wasn’t much good with books, so I’d get bored and start mucking about, which led to me getting kicked out every other week. And then came the day I remembered the book – The Six. I took it to the desk where the librarian glared at me.

She raised an eyebrow and said only one word, but it was dripping contempt, ‘Why?’

I shrugged. ‘Wor kid said it was canny good.’

She stamped it and pushed it across the desk. ‘You’re a moron, Mulhern. You deserve a book like that.’

Maybe I should have been insulted, but to tell the truth, this was class. If that book could provoke such a reaction, maybe it really was good.

It was. Mainly because it was about kids like me, like my brother, like the other kids on our estate – real people. They were all in a gang and they swore and stole and had fights. Class.

The Six isn’t in publication any more, which is sad. Maybe it wasn’t very popular; maybe it isn’t considered to be great fiction or have literary merit. But to me, it’s one of the most important books out there, because it was the one that grabbed me by the throat and held me tight. And for me, that’s the sign of a damn good book.

Thanks for the chance to drop by. Feel free to follow the tour.

***
I love that this wasn't some classic but some sort of random book the librarian did not approve of.  Like Colin says, pure class.  And I think that sometimes parents and teachers forget that the classics aren't for everyone and that readers will find something that interests them.  And who knows what may happen then?

Colin will be visiting my friend over at Pewter Wolf tomorrow, 19th April, so do pop by there as Colin talks about discovering YA.

Isn't it sad, how our most beloved books from childhood are often no longer in publication. Although I have found since searching old copies of favourites that they don't always live up to my memory of them.

I think it is amazing that Colin was a reluctant reader,yet now writes books.

I loved the Steve Jackson books - I think I still have my copies (actually, they belonged to my brother but I half-inched them). At least these are still in print and available at our library!

Thanks for your lovely review of my Lilah May book on amazon. You might be glad to know that a longer book (ghost story) is due out next Jan!
Kind regards