The Purging of Kadillus by Gav Thorpe 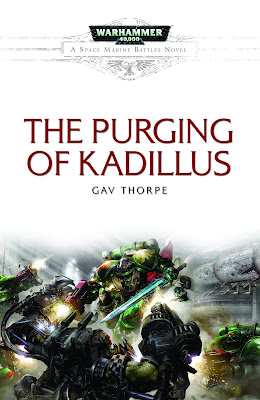 ++ This is Sergeant Aquila of the Ravenwing. We have encountered heavy resistance: Ork infantry in the hundreds and supporting light vehicles, including crude dreadnoughts. All enemy troops are approaching Koth Ridge at speed. If allowed to continue their advance they may be able to link up with Warlord Ghazghkull and his forces in Kadillus Harbour.

We still have no confirmed visual of the ork landing craft, or their drop zone and cannot confirm that this is the final wave of the reinforcements. The foe will pay a high price for our lives, but Koth Ridge cannot hold. ++

The purging of Kadillus starts as it means to go on: elbows deep in greenskin action. And in several places, elbows deep in a greenskin. Warlord Ghazghkull, still on the rampage after the Armageddon conquest, has turned his sights on Kadillus, his numbers bolstered by a large Bad Moon warband and a secret, unexpected technology.

What he hasn’t quite reckoned on is the Dark Angels garrison at Kadillus and their bloody minded tenacity. Grossly outnumbered and wrong-footed by Ghazghkull’s rapid advance and seemingly endless reinforcements, the Dark Angels are pushed to the limit to contain the Ork threat. Utilising every weapon in their arsenal, from daring scout raids, to last-man-standing defensive actions, armoured assaults, orbital bombardments and deep striking terminator assaults, all kinds of mayhem are unleashed and Gav has stuffed Purging with enough exploding vehicles, bodies and melee carnage to make Michael Bay feel grossly inadequate.

As ever though, it’s the interaction between the characters that provides skeleton for everything else to hang on. A small host of characters share the limelight, rather than a single main character, each pertaining to a different aspect of the unfolding conflict. I particularly enjoyed the viewpoint of the scouts and the apothecary – the scouts for their methodical and sensible approach and Sergeant Naaman’s perspective, and the apothecary simply because the unusual choice of character viewpoint, putting a fresh twist on the fighting. What was equally pleasing was that each is distinct and has their thread of the story concluded one way or the other, rather than being left in some kind of literary limbo. It shouldn’t come as a surprise, given Gav’s experience, but it’s always good to see.

It’s damn good fun and very more-ish - I rampaged through it in a single, scone fuelled sitting on a lazy Sunday morning. More please.

You can read an excerpt here.

I particularly enjoyed how Mr. Thorpe brought in the chaplain from Angels of Darkness, I love it when authors use characters from other books that aren't in the same series.