The Taming of Lilah May by Vanessa Curtis 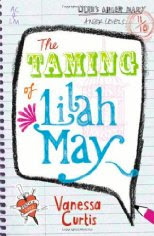 
I'm Lilah May and I'm ANGRY.  So angry that I'm about to be excluded from school, my parents can't control me, and only one person in the world understands me. And that's my best friend, Bindi. I haven't always been this way. It all started with my brother Jay. And what no one realises is that it's all my fault.

The Taming of Lilah May is a well written contemporary novel by Vanessa Curtis who gave us the Zelah Green books. In Lilah May we meet the main character, Lilah, as she goes through a particularly tough time at school and at home.  She's a troubled teen and it's actually quite obvious as to why she's troubled: her brother's disappeared and has been gone for several months.  Her parents tip-toe around the white elephant in their lives and hardly mention his disappearance.  Lilah feels angry, scared, betrayed and also repsonsible for him leaving the house and not coming back.

She keeps an Anger Management Diary that is wonderfully telling of her outlook.  We understand her actions and why she acts the way she does.  Her parents seem to have forgotten about her, each other and live past one another.  Her mother is a children's entertainer and dresses as a clown to do so.  Her dad is the keeper of the lions at the local zoo and seems to be the one who has some clue as to how to deal with Lilah.  He instigates Taming Lilah afternoons and they are humourous and real and makes the reader realise how much he too hurts as a parent.  Lilah's mum is far more of a mystery and to be honest, I really didn't like her all that much.  I can understand where she comes from but it doesn't mean I have to like her.

The story is a very quick read - there is some swearing and temper tantrums, but none of it feels gratuitous which is great.  Although the novel is aimed at teens, I think younger, more mature readers will probably identify with Lilah far more than older teens.  The story really is told in this closed space, if you can say that.  Completely about Lilah, how she's feeling, what she's going through.  There is very little intrusion from the outside world, so when it does happen, you are startled.  Especially when the one boy Lilah does quite like turns to her and reprimands her that the world does not evolve around her and that, to be honest, things are pretty crappy for a lot of people and that she should stop being selfish.

I enjoyed Lilah May but would have liked more - I already mentioned it's a quick read, and it is both in respect of the size of the book, as well as the size of the story.  It doesn't end with a happily ever after but it does end on a note of optimism which is great.  Lilah's character undergoes some change which is equally well done and we get a glimpse into the lives of others around her and see that just as Lilah pulled through, other events have become resolved as well, and some in a surprising way.

I'd recommend The Taming of Lilah May for a lazy afternoon's summer reading.  Vanessa Curtis has done well and I really hope that she'll give us bigger books in the future - she writes great characters and I'd like to spend more time with them!

Find Vanessa Curtis's site here.  The Taming of Lilah May is out in May from Frances Lincoln.

This looks interesting. I've been searching for books that can give me a quick read but at the same time contained substance. I'm gonna try and look for this later.