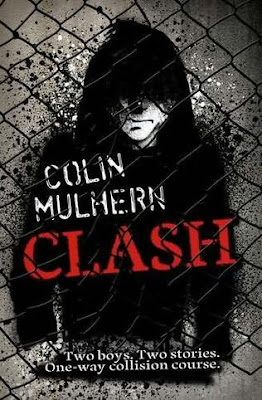 
When these two clash, a catastrophic sequence of events unfolds...


I was surprised by Clash. To be fair, I wasn’t sure what to expect. I thought I’d see a lot of posturing and hard-man action packaged as YA fiction. What Colin Mulhern gives us instead is something far better and more adept.

Alex, the very quiet boy with the thousand yard stare. Small of stature and unassuming, you wouldn’t think to look at him twice. But what that unassuming quietness hides is an incredibly violent and brutal side. But here’s the rub: Alex knows exactly what he’s doing when he acts this way. He is intelligent enough to realise what he’s doing and he knows he can stop it, but he acts the crazed psycho because it means people leave him alone. His home life is not pleasant. His dad is a complete jackass and ignores Alex unless he’s taking part in cage fighting. Alex’s mum is a victim. Her husband abuses her - initially not physically (not that we know of anyway) but she is definitely verbally abused and treated very badly. You literally will something bad to happen to Alex’s dad because then hopefully Alex and his mum have a chance for a better future.

On the other hand we have Kyle who is ridiculously talented as an artist. He lives with his mum who is a single parent. She is also pregnant at the start of the novel, and we get a sense of Kyle and his mum being close and pretty cool. They work well as a unit and you want good things for them.  Although they don't have a lot of money, you get the sense that they are frugal and that Kyle doesn't lack for anything.

It all starts in art class when Kyle turns in a piece of art. Alex has no idea who Kyle is, but the painting that Kyle left behind really draws him in.  He is stunned that anyone his age can be so talented, have such skills.  He identifies with this kid and he takes the artwork, to keep it safe, as he knows some other yob will take it to probably destroy it.  Alex reckons that by taking the bit of art, he's not even stealing it.  He's keeping it safe.  But he wants to know who the artist is and he goes out of his way to find out.  So he seeks out Kyle specifically to see who this kid is who can draw so well, who is so talented. Of course Kyle and his friend Gareth are terrified out of their tree when this skinny psycho kid walks up to them and just stares at them, Kyle specifically, for a few moments. Before walking away, not saying or doing anything.

It freaks them out. What was that all about?  They are convinced that Alex will soon be hunting them down to hurt them.  But it doesn't happen.  Not in the way they expect.

And the author takes us on this amazing tour of both these boys’ lives in the next few months as things change and get both worse and better and then completely insanely bad. Kyle and Alex aren’t really friends during the book - they are aware of each other but they don’t really realise how their stories are linked. And it is a testament to Mr. Mulhern’s writing skill as to how he brings the strands in this spiderweb of a story together in a completely believable and low-key way.  It is understated yet the impact is huge.

I can’t really go into more explanation here - I’m sorry, as it would be very spoilery and I’d hate for that to happen. I can however say we are shown how Alex and Kyle’s characters develop and grow and how they cope with everyday realities and how these realities intrude on their separate lives and how these separate lives converge into one truly awful moment and the repercussions of that. Gaah! I hate sounding this vague but really, saying more would be unfair.

I went through a gamut of emotions whilst reading Clash but in the end, whilst I was smiling, I also had this slight feeling of dread in my stomach. I read Clash in a few hours, in one sitting. From 11pm to 1am. On the weekend, and then spent the next forty minutes talking to Mark about the book.

Because that is what Clash does - it takes you on this incredible journey and it makes you think and wonder. I really liked it. I thought the writing was very tight and the plotting tighter still - I mean, you could bounce a coin of the plot strands’ butt! I definitely think that Colin Mulhern is a new talent to watch - Clash is suited for older and confident readers. There is a bit of swearing and there is some violence but it is all within the context of the story and it definitely does not glamourise violence or fighting in any way. It is quite stark and brutal but the story has an elegance to it that really had me turning the pages.

Oh, another thing. The chapters are all first person in either Kyle or Alex’s voice respectively and it works really well. As I wrote this I thought to myself that reluctant readers may benefit from reading Clash as the chapters are strongly written, not difficult to read and importantly they are kept short, so it feels like you are moving rapidly through the story.

I’ll stop gabbing now. If you have the chance to read Clash, please go ahead and do so. Or if you know a boy or girl who may want something different, something contemporary and local, with strong characters, this is definitely one to recommend.

Thanks to Liz and Non at Catnip for sending this out to me to read. I had a blast. Now, please ask Colin to hurry up and write his next one!
Who wrote this? Liz at 8:56 am

This doesn't sound like the type of book I usually go for, but I'm quite interested in reading it now! Thanks for the review. :)

Wow, this book sounds amazing. It definitely sounds like my kind of book both in terms of the plot and the way it left you thinking.