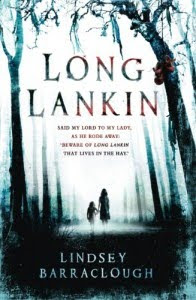 Beware of Long Lankin, that lives in the moss . . .

When Cora and her little sister Mimi are sent to stay with their elderly aunt in the isolated village of Bryers Guerdon, they receive a less than warm welcome, and are desperate to go back to London. But Auntie Ida's life was devastated the last time two young girls were at Guerdon Hall, and now her nieces' arrival has reawoken an evil that has lain waiting for years.

A haunting voice in an empty room ... A strange, scarred man lurking in the graveyard ... A mysterious warning, scrawled on the walls of the abandoned church . . . Along with Roger and Peter, two young village boys, Cora must uncover the horrifying truth that has held Bryers Guerdon in its dark grip for centuries - before it is too late for Mimi.

I seem to be talking a lot lately about the sort of stuff that makes me uncomfortable so I may as well add another to the list - creepy stuff. I'm fine with old-fashioned slash horror such as Scream but spooky things play on my mind at night when the stairs creak and the dog whimpers in her sleep. That being said I put Long Lankin on the shelf for a while whilst I read other things. The problem was that it sounded so brilliant that I knew I wanted to read it whatever. It wasn't what I expected. Set in mid to late 1950's England (I'm guessing), Cora and Mimi arrive at Aunt Ida's large but decrepit house to find they're very much unwelcome. When it becomes clear that they won't be going home straight away Cora is given a long list of rules; don't go near the church, stay off the marshes, don't poke around the house. Of course, the first thing Cora does is check out all of these places.
Cora's not alone though. Just up the road lives Roger with his three brothers and baby sister. Their house becomes something of a refuge for Cora - there's always plenty of food and Roger and Cora become friends. Together they start to investigate the local church and discover that past events seem to be happening again. There are some truly chilling passages in Long Lankin. One that sticks in my mind is a ghost that Cora sees in one of the forbidden rooms. She's crouched upon the floor with her back to Cora one hand pointing up at the ceiling. The style of writing is so atmospheric that I felt that I was actually Cora, standing in the dark watching the woman in the corner. As the book progresses Guerdon Hall seems to decay at an even faster rate, flies appear, roofs leak and window frames crumble.
The story is told through a variety of viewpoints: Cora's, Ida's and Roger. My favourite by far was Roger who gave me some laugh out loud moments. I also enjoyed the historical setting and loved how the children were pretty much left to themselves or to look after four or five small children. As long as they did as they were told and stayed out of the way then the grown-ups were happy - a world away from the society of today.
Long Lankin is definitely spooky, alarming and disturbing but it's also brilliantly written with a real eye for historical detail and wonderful characterisation. Alongside the horror is a tale of friendship, family and love. I found this book to be a real treasure.
Who wrote this? Essjay at 7:00 am

Brilliant review - it has confirmed that I will not be able to read it for fear of nightmares so it iwll be whisking its way to the gorgeous Sya :D

thanks for the review. I remember the first time I read Salem's Lot, I couldn't sleep. I loved the book and feared it too in equal measure. I love the spooky except that with a change in focus of my readings I am not likely to be reading this genre for a while.

Thanks for the review--I hadn't heard of this one before, and it sounds like one I'd like!