A Few Thoughts on Writing by Glenda Millard

We are so excited to be part of the bloggers bringing Glenda Millard's excellent novel to a wider audience. A Small Free Kiss in the Dark is about Skip, who is an outsider. He's never fitted in. So he takes to the streets. Life there may be hard, but it's better than the one he's left behind, especially when he teams up with old homeless man Billy. Then come the bombs which bring little Max and Tia, the sad dancer with a tiny baby, into Skip and Billy's world. Scavenging for food, living on love and imagination - how log can Skip's fragile new family hold out as war grips the city?

Glenda has agreed to do us a gorgeous blog post about writing as I know many of our readers are aspiring writers themselves or even just readers who enjoy finding out about process. 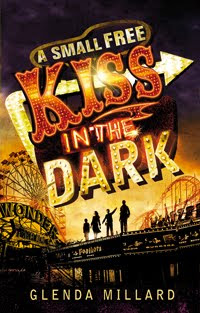 I’ve been reliably informed that the blogs on My Favourite Books are read by aspiring writers and students, and because of this I should give you the nitty gritty. I guess that means nitty gritty about writing. But before I get to the writing part there’s ancient history to tell. It’s about how I accidentally became a writer.

At school I loved writing essays and poetry, but had no idea I could make a career from writing. I left school at 15 and went to work in an office, doing book-keeping, typing letters and filing. Later on I got married and had four children.When my kids were teenagers the business where I was working was going to be sold and it seemed certain that many employees would lose their jobs.

So I enrolled at night school to learn a new skill - marketing. I had absolutely no idea how to write the reports required for homework. So I wrote essays instead. The lecturer approached me one evening and tactfully suggested I might do better to study creative writing. A few years and a few jobs later, I saw an advertisement in the paper for a short evening course called ‘Writing for Money’. It turned out to be focused on journalism, but one night we got to write whatever we wanted to. I wrote a story and the tutor suggested I send it to a children’s publisher, which I did. Twelve months later I received a response from the publisher and subsequently in 1999 my first book was published - a picture book.

I kept working full time and in the evenings after dinner and dishes were done I’d sit in the corner of the lounge-room with a massive set of earphones on to block out the noise of the television and my boys wrestling and my daughter playing clarinet and all the other things that go on in families, and I’d write. To begin with I wrote mostly picture books because I could manage those in the small amount of time I had to myself. But after a few years I wanted to see if I could complete something longer. So I made a deal with my family. For 6 weeks I didn’t have to cook or clean and weekends were mine. I wrote my first novel. Over the years I reduced my working hours to part time, but in 2005 I was made redundant from my position as an audio typist. On the same day I was notified by telephone that one of my novels for younger readers has been shortlisted for a prestigious award and I decided that the time had come to see if I could make a go of writing full time. And that’s what I’ve been doing ever since.

Now moving on towards how I do the writing:

I’m good at planning special events such as parties and holidays. I’m fairly organised. I pay my bills on time, keep appointments - that sort of thing. I try hard to keep my home reasonably tidy but that’s not easy because I’m also the kind of person who collects odds and ends. I'm drawn to items that have belonged to other people, places or times. Things with history and heart; bone-handled knives, bread-boards, rolling pins and wooden spoons, thimbles, handwritten recipe books, postcards, empty flower-seed packets and unusual buttons. I can't resist keeping fallen things like feathers, leaves and nests. I’ve even been known to collect newspaper clippings just in case they come in handy. I also like lists. Maybe I should have put all the above into one.

But despite being a habitual list-maker, having above average planning skills, and being duly diligent about keeping appointments, I am definitely NOT good at planning stories. I’ve tried writing timelines, making maps and writing pages and pages of plans, but it just doesn’t work for me. The minute I begin to write the story, things I hadn’t foreseen mysteriously begin to occur. So I’ve learnt from experience to begin with basic information and discover the rest on the journey.

Three main things got me started writing A Small Free Kiss in the Dark.

The first was a day spent with a man in a factory where he restored old carousels (merry-go-rounds) to their former glory. This piqued my interest in using one as a setting for a story. Just as a matter of interest - as a direct result of that day and well before I started ASFKITD, I wrote a picture book about a carousel horse. It’s called Lightning Jack and will be published early next year.

A newspaper headline, ‘Urban Tribes’ made me consider what life would be like for a young, homeless person living alone in a city. I wondered if he/she might join a gang or tribe and how or if this might be helpful and in what ways. I wondered if loneliness or fear might be the catalyst for this relationship or if it might be something else. Something beyond that person’s control.

Later on I read an article about people known as freegans and discovered that, due either to necessity or for ethical reasons, freegans live on what other people waste. Things like food, clothing, furnishings and even accommodation such as derelict buildings. The two topics, urban tribes and freeganism seemed to go hand in hand. I liked the idea of using war as a backdrop to the story and the carousel and desolate fun park as symbols of what war takes away; childhood, pleasure and freedom. Once I started writing, the fun park became shelter and tribe became family, the thing that held the gang of five in ASFKITD together until the very end.

Writing Against Advice (or believing in yourself)

On hearing my meagre outline for the story, my partner commented that no matter how resilient the human spirit is, war is disempowering and especially so for children. So I put the project aside before I’d even started, unsure whether I could write a story set against a backdrop of war that was not about war and, perhaps more importantly, could I credibly show hope even in the most dire circumstances? Eventually I decided there was only one way to find out and that was to write the story.

Names and Other Odds and Ends:

And so I began. I’d made a list of characters I thought might play major roles and eventually narrowed it down to a twelve-year-old boy. I also had a long list of names. Names are very important to me. But none seemed to fit this boy. However as I wrote and learnt more about the child who had been brutalized, bullied and neglected so often that he felt anonymous, he named himself. The boy who skipped school, skipped town and slept in builders' skips was Skip. I discovered Skip’s compelling desire to find love, acceptance and a family of his own and used him to demonstrate the great motivational power of hope. ASFKITD is the first story I have written in first person. I think this helped me tap more deeply into Skip's feelings and thoughts.

Odds and Ends from the Book and from Life

Pennyweight Flat Children's Cemetery is a place close to where I grew up. The library where Skip, Max and Billy first take refuge is closely based on the State Library of Victoria in Australia, with its beautiful domed reading room. The fun park is based on one I used to visit as a child, where my favourite ride was the carousel of War and Peace. There is an address in the book where some of my children lived while they studied at university. Van Gogh, one of Skip's favourite artists, is also one of mine. I have an umbrella decorated with his famous painting, Starry Night Over the River Rhone. Billy, another major character in the book, and I share a love of the music of Bob Dylan. There are references to Dylan's lyrics in the story. I am always surprised when I go back over a book I've written, to find out just how many things are in it that have NOT been invented....things that are rich and real and true, that come simply from day to day living.

Thank you for giving me the opportunity to make my blog tour a success.

***
You are welcome, Glenda!  Thanks for sharing this with us.  I love hearing how much went into the making of ASFKITD.  My review - should Blogger decide to play along - will go live this afternoon.
Who wrote this? Mark at 8:58 am