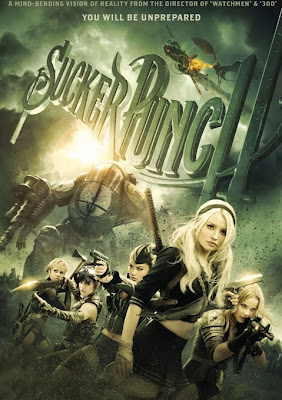 Liz and I were lucky enough to win a pair of tickets to a preview screening of Sucker Punch at the Imax this past Friday (thanks Titan!) which was cool by itself, but said coolness was compounded by the arrival of Zack Snyder to introduce the film and do a quick Q&A, dissembling about the driving force behind the movie and what he was looking to try and capture with much enthusiasm and a slightly shy delivery, like a boy done good who’s suddenly dragged up on stage in front of the whole school.

At this point, neither Liz or I had seen anything except the trailers, nor purposefully read any of the reviews out there. We knew there’d been a mixed reception to the movie from the conversations bouncing around Twitter, but that was about it. It was intriguing hearing ZS talk about how he had taken genre and put it under the spotlight, seeking to find the meaning of it, and how women in genre are perceived, ultimately turning that on itself and how the characters take ownership of that perception.

Then the lights went down, and it was time to taste the pudding. 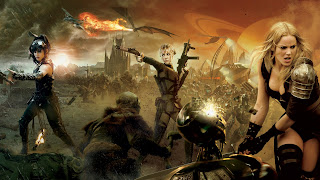 The movie opens with the death of Babydoll’s (Emily Browning) mother, and the subsequent fallout from the reading of her Will, the content of which sparks something dark within her odious stepfather. He capitalises on the chain of events with cold cunning, and Babydoll is dragged to a cold and austere lunatic asylum to be locked away, the threat of a lobotomy looming large over her, and the process eased by the grease of bribery. It’s done with very little dialogue and works very well.

Lost, alone and scared, there is little hope left to her from outside sources, so she has to look inward for the strength to endure and overcome the bitter reality of the hand that fate has dealt her. It’s this process and the revelation of world that opens up to her where the magic of Sucker Punch truly reveals itself. It’s a brilliant mechanism for showing Babydoll’s struggle and her journey, but it’s also where I think a number of critics have fallen flat because they’re looking at it too literally and complaining that the plot is all over the place. It’s not. Sucker Punch is all about Babydoll’s journey and perceptions. It’s a story within a story, as tight and cleverly plotted as Inception’s dream within a dream. Only with giant, minigun wielding samurai, battlemechs, a bloody awesome dragon and trench warfare with steampowered zombies. The action sequences are classic Zack Snyder set pieces- strong, evocative images, beautifully shot and wrapped up with an exquisite brutality.

Liz and I disagree on a wide range of subjects, particularly when it comes to movies, but we both though Sucker Punch was a brilliant piece of storytelling in the mythic tradition- the hero’s journey. It rewards viewers who look beyond the thumping gunfire, flashing swords and toned thighs with a deeply satisfying, bittersweet tale of a girl who rises from the depths of despair to burn brightly in defiance of an inevitable darkness.

Go see it. It rocks.

I just love the look of this one. I really want to take the girls to see it - suitable yes or no??
Is it a book too?

Hi Emma - definitely NOT suitable for the girls. AT all. Well, not yet.