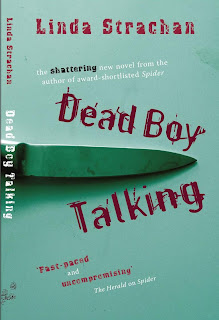 Josh has 25 minutes left to live. Lying alone in a pool of blood, Josh has not much time to think. Yesterday he stabbed his best mate, and now it has happened to him. But there are questions he cannot get out of his head. Like, how did he get into this mess? Will anyone find him in time? Will his girlfriend forgive him, and what really happened to his older brother? As his life slips away, the events of the last 24 hours start to look very different.

I read DBT yesterday during my morning commute and finished it off at lunch time. I'm not even a particularly fast reader and this isn't really a very short book - it is however a page turner and it drove me forward, making me want to find out what happened, and how it happened and why it happened.

Opening the book, on page 1 starts with this line:

The first page isn't even a chapter page, it's just there, written in Josh's voice, first person point of view. The tone is slightly shocked, not entirely sure what's just happened, the description of the act is a bit removed from reality, distanced. It's just me, Josh, you know me.

The author writes convincingly in Josh's voice, as the chapters alternate between then (the past 24 hours) and now. The now posts are all done in first person, making Josh's predicament immediate, in your face. His voice is a constant reminder that he's in trouble, that things went very wrong very quickly with little enough reason behind it. The then chapters follow Josh and his friend Danny as they try and stay away from Harry and his gang of aspiring criminals. A chapter is also dedicated to Skye who isn't really Josh's girlfriend, they are more really good friends with feelings for each other.

As the story progresses we find out the story behind Josh's actions the day before, when he stabbed his friend Ranj. We learn the backstory to the intense dislike that Harry, the leader of the YHT gang has for Josh. We find out more about Josh's friend, Danny and his situation at home. We learn about Josh's family who is no longer a family, not since his older brother Gary left, anyway.

The author weaves a strong story, filling us with empathy for these broken and misguided characters. We come to understand why the attacks happened and the author makes a point of not belittling the characters' emotional drive as just "teenagers mucking about". To each one of them, what they are going through is immense and scary and personal. The full story gets told but the story is not an apologetic one. Stabbings have consequences and we are made aware of that, as we are with Josh, every step of those 25 minutes he lies bleeding out.

It's a powerful story made more so by the author's understated style of writing. Linda Strachan has managed to tackle a variety of tough subjects in Dead Boy Talking and never once does she veer into being preachy or a told-you-so tone which would have teens running for cover.

Deeply thoughtful and sad, Dead Boy Talking, had me sobbing like a little girl into tissues over my lunch - thanks Ms. Strachan - as I read the last few pages. I really did enjoy the book. Yes it's sad and tragic but you know what, the ending lifts it just that bit, so that you are left feeling a bit optimistic.

Find Linda Strachan's website here and those of her publishers, Strident, here. Dead Boy Talking is out in
Who wrote this? Liz at 9:33 am

Read and reviewed this last week and I thought it had one of the most mesmerising book openings ever!

What a cracking first line!

What age group is this book aimed at? I'm thinking my nephews might enjoy this one. Youngest is 12, eldest is 16...

Sharon - you know, I would say the 12 y/o should be okay with it. There is no bad language but it is very gripping. The 16 y/o may feel he is too cool to read it, but he'll probably get it quite a bit!

Mary - isn't it just a good bit of writing? I really hope it does well.

Oh, yes, the 16 y/o is a little 'off' books at the moment, at least fiction stuff. He's just started studying philosophy, so there are now textbooks all over their home as he gets to grip with the new subject. :)

Sounds gripping! Definitely one for the To Be Read pile!

Oh my, this sounds a powerful read. Going to have to check this one out!