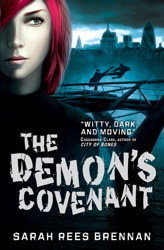 
Mae Crawford always thought she was in control. Now she's learned that her little brother Jamie is a magician and Nick, the boy she'd set her heart on, has an even darker secret. Mae's whole world has spun out of control, and it's only going to get worse. When she realises that Jamie has been meeting secretly with the new leader of the Obsidian Circle and that Gerald wants him to join the magicians, she's not sure how to stop Jamie doing just that. Calling in Nick and Alan as reinforcements only leads to a more desperate conflict because Gerald has a plan to bring Nick down - by using Alan to spring a deadly trap. With those around her torn between divided loyalties and Mae herself torn between her feelings for two very different boys, she sees a chance to save them all - but it means approaching the mysterious and dangerous Goblin Market alone...

I enjoyed The Demon's Lexicon and was blown away by the twist at the end. I was curious to see how the Demon's Covenant moved the characters on given that the big surprise had been revealed. Mae and her brother Jamie are now back at home in Exeter, back in school and supposedly back to a boring, regular life. However, it doesn't take long for Jamie to be drawn back into danger and temptation by wizard Gerald. It appears that Jamie's powers are great and if Gerald doesn't draw him into the Obsidian Circle then another (the Aventurine Circle) has got their eye on him. When Mae calls on Nick and Alan they come immediately but something between them appears strained.


With the arrival of Nick and Alan events become unpredictable and dangerous. Mae had started seeing a boy at school, Seb, but finds herself drawn to Nick who in turn directs her towards Alan who still has feelings for her. I enjoyed reading Mae's point of view. She is supposed to be the least talented, most normal of the group but doesn't feel left out. Her very human concerns mixed with her alarming experiences in Demon's Lexicon have shaped her into an intriguing character. Whilst Nick's motivation could at times be difficult to follow in the previous book (although totally understandable retrospectively) Mae is engaging, loveable and resourceful. I especially enjoyed her times with Nick attempting to explain to him how to be more human. She has a love for slogan t-shirts and above all - dancing.


I know I'm not alone in being intrigued by the Goblin Market. I'm pleased to say it forms the basis of a complicated plot and Mae is soon dancing there with Sin, calling up demons. When Mae discovers that Alan is keeping secrets, awful secrets, she goes to the market to arrange her own plan. The Goblin Market is as beautiful and terrifying as ever. Although Mae isn't magical she feels a strong connection to the market that goes deeper than just her love of dancing. As we're following Mae we get a better understanding of Jamie and his and Mae's shared background. I loved the banter between these two, it almost reminded me of Black Adder in some parts. Jamie's attempts at friendship with Nick is both amusing and touching. We also get some insight into Alex and Nick's childhood through the diary of Daniel Ryves. This brings me to Nick who is as gorgeous, bad and compelling as ever. I'm not sure how Sarah Rees Brennan manages to make him both vulnerable and untouchable at the same time but I spent most of the book worried for his safety.

The Demon's Covenant is a wild read; the plot races and twists, the characters have deepened and there's a strong underlying strain of humour throughout. As a result I can honestly say that I would be happy for any of the characters to be the main point of view for book three. There are plenty of unanswered questions to be resolved, I'm looking forward to the final instalment.
Who wrote this? Essjay at 2:04 pm

I loved The Demon's Covenant. In fact, this review just made me remember how much. My favourite book of 2010 so far :D. The third book is going to be in Sin's point of view...I'm slightly worried. This means less Nick/Mae/Jamie/Alan. But I trust Sarah Rees Brennan to make it awesome :P.

Really? Sin's point of view? Well, like you, I'll just trust SRB to be as brilliant as ever. I'm really surprised by that news, thank you for letting me know :-)