The Unit by Terry DeHart 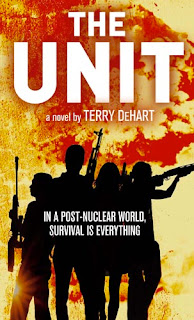 Jerry Sharpe is an ex-marine and, for him, survival means protecting his family by any means necessary.

Susan is learning just how far a mother will go for her children. But how far will she go for a man she doubted before the bombs fell? As Jerry's training and instincts take over, she is certain of one thing - her children need her.

Melanie was going to go to college. Now, she is struggling to find a way to live in a world gone mad without losing sight of what she believes in.

Scotty has a new mission - more than survival. He was saved, and he'll be damned if he won't fight for what's right.

And Bill - Bill was locked up, but the power went out and the guards left. Now he and his fellow inmates have realised that everything is free for the taking . . . if you're strong enough to hold on to it.

The Unit starts us off in the middle of a gun battle between a group of identified men and a group of survivors traveling by road, trying to get to safety. There are women, children, elderly people, men with guns. They have cattle and food and are moving openly along the road. Dangerous and stupid, especially when the world has gone haywire since nuclear bombs have gone off over several major cities in the States.

We see the gun battle take place through the eyes of Jerry and his family. He urges them to stay low, to keep still, whilst he watches the slaughter down below. It is not something he relishes but by watching we come to realise that it is something he has to do. It keeps him focussed and grounded. He has to look after his small family, his unit, and ensure their survival, even it it means following a group of survivors, using them to clear the road for them.

It is difficult to put yourself in a place such as this. Where you have to be pragmatic, sensible and brutal. Where it is a kill or be killed scenario. Where you both admire your father for forging ahead, to try and get you somewhere to safety, whilst disliking him at the same time for what he is and what he is forcing you to do: to keep on marching, for hours on end.

The novel is gritty is and brutal, and exercise in warfare and survival. It doesn’t come near the starkness of The Road but it’s pretty damn close. I found myself reading on and on, almost against my will. I was fascinated, worried, repulsed by the depravity depicted in the novel. It raised, to me at least, the question: how far are you prepared to go to survive? And by doing so, what amount of your humanity will you be prepared to lose in the process?

Dystopian and post-apocalyptic novels are finding homes everywhere at present and I have to say, it’s a sub-genre I find myself interested in and I’m not entirely sure I’m comfortable with that. But, it is what it is.

Terry DeHart’s The Unit is a strong reminder that we are tougher than what we give ourselves credit for. All of us have untapped reserves and that when pushed, those reserves are what keeps us alive.

As the novel progresses and the small family gets split because of a various reasons, the narrative becomes more insular. Each chapter is told from another person’s perspective but once they aren’t with each other any more, we have a lot of internal questioning dialogue and observations about themselves and the world. We are filled in on the back story, about what life was like before the bombs, what they were like after the bombs, how long they’ve been on road, how people have degenerated in such a short period of time.

It is the daughter, Melanie’s story, that really bothered me the most. It stayed with me the longest. I disagreed strongly with the author for putting her in such an awful situation, being raped and degraded in such a fashion. It would put anyone’s back up, but once I finished the novel and sat back and thought about it, I felt that I understood why he wrote the story the way he did. It was inevitable and awful, but it was an avenue that had to be explored, to showcase Melanie and Jerry’s bond and strength of character whilst showing the cravenness of the group of delinquents who did capture Melanie.

The writing is tense and holds the attention. I had to force myself to stop reading because I know how involved I sometimes get with stories, especially hyper-realistic stories such as this one.

I took a few days off after reading it to recover. It’s an odd book for me - I both loved it and enjoyed for various reasons but then it also made me very uncomfortable and deeply unhappy. So, from that point of view, the author has succeeded in his job. He’s taken me out of my comfort zone and shook me around a little, making me think. I’m not sure I liked that.

The Unit by Terry DeHart is a book that has great pace and vivid descriptions. It is not a comfortable read, it is a good read but it should not be tackled lightly.

The Unit is out later this month from Orbit. Find Terry DeHart’s website here.
Who wrote this? Liz at 8:04 am

Just read the book. Melanie's story bothered me the most but for a different reason. Shook my head that she remained such a dipstick in trying times. To think she gave a passing thought of leaving her parents, with Scotty. Why would scotty have left with deadweight such as Melanie?

I think the author went a little overboard with the character should've dialed it back a bit, So we'd feel more sympathy.

In the character Melanie the author makes a point; the only situation in which her idealism works is when it is safely wrapped in the cocoon created by those who take the opposite view. Her refusal to carry a weapon only works because the others do. Her refusal to contribute to the defense of the family goes so far as to become a liability as the rest try to preserve their own lives and safety. This is nothing new or even surprising to me. Those who fight are often criticized by those who won’t even while the necessity to fight seems manifest all around them. So what is to be done? You don’t turn your back on them. You put up with it. You try to protect them (from themselves and others). You don’t think about whether or not they deserve it. You do what you must because that is who you are.
No great love has a man than that he would lay down his life for his friends. Happy Veterans Day my fellow warriors…