Plague of the Dead - Z A Recht 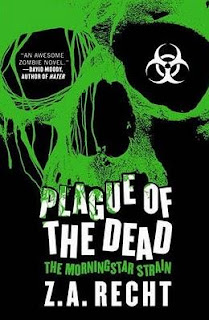 The end begins with an unprecedented viral outbreak.

But the end is only the beginning.

The victims return from death to walk the earth. When a massive military operation fails to contain the plague of the living dead, it escalates into a worldwide pandemic.
Now, a single law of Nature dominates the global landscape: Live or die, kill or be killed.
On one side of the world, thousands of miles from home, a battle-hardened general surveys the remnants of his command: a young medic, a veteran photographer, a brash private, and dozens of refugees- all are his responsibility. While in the United States, an army colonel discovers the darker side of Morningstar and collaborates with a well-known journalist to leak the information to the public...

The first thing that drew me to Plague was the cover- the luminescent green skull that dominates the front cover, biohazard symbol in eye, is pretty hard to ignore. The promise of a zombie driven apocalypse sealed the deal and, book in hand, I retreated to the sofa.

It opens with an exchange of emails between two of the principal characters that provides the background for the initial encounter; the first chapter is a clever, atmospheric vehicle to flesh out the premise of the story.

Matters leap on from there to a situation where the outbreaks have spread and the overstretched army (with scant support from either navy or airforce- must be a recession) are trying to contain the epidemic. But they’re not prepared for the scale of it, nor the true nature of the infected, and their quarantine is broken. The infected give them no respite, forcing them onto the back foot and leaving them desperate to disengage and regroup.

The two main plotlines run parallel to each other, and between the two an image of civilisation teetering on the brink of collapse is built up. The stories are slowly woven together, although by the time this happens the dead are ascendant and the characters are facing hard decisions and the bitter reality of life at ground zero as the familiar trappings of modern life are torn away.
I really enjoyed how the nature of Morningstar and how it reacts with the host body was gradually explained; it also sets up an intelligent twist on the fast or slow zombie debate by presenting a plausible scenario for having both types, and it works really well. I’ve no doubt the concept will be borrowed by others in due course.

The characters are a bit ‘thin’ to start off with, and some remain so over the course of things, but I was having too much fun for this or the occasional pinch of salt to bother me. It would have been nice for some of the deaths to have more of an impact, but red shirts and zombies go together like peas and carrots.

Plague’s a blast of zombie fuelled mayhem that injects some interesting new ideas into the mix, and I’m glad it’s being re-released by Simon & Schuster/ Permuted Press. I’ll definitely be keeping an eye out for ‘Thunder and Ashes’ (due November).
Who wrote this? Mark at 9:00 am