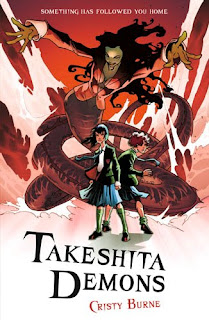 Synopsis:
Miku Takeshita and her family have moved from Japan to live in the UK, but unfortunately the family's enemy demons have followed them…Miku knows she's in trouble when her new supply teacher turns out to be a Nukekubi - a bloodthirsty demon who can turn into a flying head and whose favourite snack is children. That night, in a raging snowstorm, Miku's little brother Kazu is kidnapped by the demons, and then it's up to Miku and her friend Cait to get him back. The girls break into their snow-locked school, confronting the dragon-like Woman of the Wet, and outwitting the faceless Nopera-bo. At last they come face to face with the Nukekubi itself - but will they be in time to save Kazu?
The winner of the first Frances Lincoln Diverse Voices Award, this is the first of a new trilogy, Takeshita Demons, with the second, Takeshita Demons: The Filth-Licker due to be published in 2011 and Takeshita Demons: Monster Matsuri in 2012.
I read Takeshita Demons in a few gulps. My first impressions were: "wow, this is pretty damn good" and then "holy smokes, this is actually quite scary" and then "I love kick ass girls!".
Can I leave my review as this? Surely these soundbites work for you? No, well, okay then.
Takeshita Demons is a slender offering that packs a punch that's full of action and cameraderie. It's a lot of different things to me as a reader: a buddy story / a quest story / an overcoming the monster story / a journey story.
Miku's voice throughout the novel is positive and true - I loved her descriptions of her grandmother and their life in Japan, how their small superstitions were important to them and how she now frets that neither of her parents are overly concerned about continuing them now that they live in London.
The story takes place over a few hours only and although it's a lot of action, Miku's storytelling is measured and thoughtful. She brings us up to speed with the family, where they used to live in Japan, with her grandmother's passing and teachings. Then we have her crazymad adventure with Cait as they outwit a variety of nasties to succeed at the end of the day, by accomplishing the tast they set themselves.
I liked the fact that the girls were always moving forward in the book - they never took a step back. They were tough and clever and were capable of standing against the Nukekubi, the Woman of the Wet as well as the very scary Nopera-bo.
Out of the three, the draconic / reptillian Woman of the Wet really scared me and it amused me no end that the author decided to twist my fear on itself and to give me a truly scary character that was maybe not as bad as I thought but it's done really well.
I think Takeshita Demons works so well because we are fully immersed in Miku's life. She uses Japanese words with little of few explanation and yet we actually know what they mean because of the context it's used in. I think this is a very valuable way of introducing younger (and older) readers to a new culture or a culture we only know of as people who do sushi really well. Miku also has to explain the superstitions and the demons to Cait, which is handy to us. I adored Cait and would love to have her as a friend - tough and sweet and most of all, very brave, she comes through in the end and saves Miku's day. Also, Cait has freckles (I have freckles) so there is an immediate connection right there. I'd like to think I'm also brave but probably not brave enough to face down some scary critters.
Cristy Burne has this magical way of writing where with the slightest bit of explanation you completely suspend your disbelief and can totally believe that these monsters are hunting the Takeshita kids. In modern day America. She's a very talented writer and as I said on twitter earlier to day, I really can't wait to read her other books in this sequence. I need to know what's going to happen to my two new friends!
Takeshita Demons is a spooky story, mild on horror with no gore, for those readers who like to be thrilled but not be mindlessly scared. It also asks to be read out loud to a class or at bed time, if your young folk is tough enough!
Find Cristy's very cool website here and this is Frances Lincoln, her publishers' site.
Who wrote this? Liz at 3:16 pm

This sounds perfect for me not only because Japan is one of my favorite countries to read about but because I like to be thrilled, not scared out of my wits ;)

Those soundbites worked for me! Looking forward to its U.S. release.