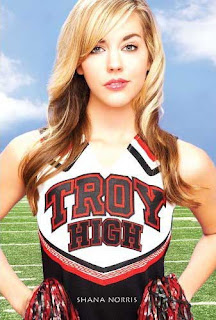 Homer's Iliad, the classic tale of love and revenge, is shrewdly retold for teens in Troy High.

Narrated by Cassie, a shy outsider who fears that an epic high school rivalry is about to go up in flames, the story follows the Trojans and Spartans as they declare war on the football field. After the beautiful Elena--who used to be the captain of the Spartan cheerleaders--transfers to Troy High and falls madly in love with Cassie’s brother Perry, the Spartans vow that the annual homecoming game will never be forgotten. The Trojans and Spartans pull wicked pranks on each other as homecoming approaches. And the Spartans' wildcard football star, Ackley, promises to take down the Trojans' offensive line. But the stakes are raised when Cassie is forced to choose between the boy she loves (a Spartan) and loyalty to her family and school. Troy High will seduce readers with its incendiary cast of mythic proportions.

When Abrams Publishers contacted me to ask me if I would be interested in reviewing Troy High I jumped at the chance. I love reworkings of classics and fairy tales and the Iliad is one of my all-time favourite stories, hand in hand with the Odyssey.

The novel opens with Cassie thumping her best mate (and Spartan) Greg during a video game. Its an easy going camaraderie and we are easily brought up to speed with the animosity between Troy and the Lacede, both the longtime-ago history as well as the current history. We are also introduced to Elena and Lucas who is Greg's brother.

When the district lines are redrawn, and Elena moves from Lacede to Troy, everyone knows there is going to be friction. No one expected Elena to fall for Perry, Cassie's older brother or for their oldest brother, Hunter to uphold his claim to Elena. Elena and Perry's romance is swift and excludes everyone else. They are unable to see the ramifications of their being together.

Cassie, never one to hang out with the cool kids anyway, is bemused when Elena decides to become her fake best friend and insists she hang around with her and some of the more popular kids and cheerleaders. Cassie isn't sure she's cut out for it - she's a band geek and she likes it. She doesn't have many friends, counting Greg as her BFF since they met at band camp several years before. Their friendship has grown regardless of them being in enemy schools. Greg's brother, Lucas is in a bad place after Elena breaks up with him to be with Perry.

As homecoming nears, the two schools play wilder and wilder pranks on each other, each time escalating the stakes slightly. Cassie finds it hard to deal with her feelings for Greg (who she "stupidly" kisses near the start of the book) and her loyalty to her family and school. More than anything, she doesn't want to be part of it. But she loves her brothers and she realises that even though she shouldn't have to, people expect her to choose sides. Now, Cassandra in the Iliad sadly had prophetic dreams but no one believed her. And in Troy High, Cassie has one awful prophetic dream but when she speaks about it, no one believes her. She has to live with the dream, the vision, on her own and it makes her deeply miserable.

Through a variety of misunderstandings and negativity in general, her relationship with Greg deteriorates and she becomes an isolated figure in a crowd of people going about their business of disliking each other. To tell more would be to spoil the story and I'm never ever keen to do that.

Troy High is a vivid retelling of the original Troy story. There are similarities in names and characters on occasion but the author is very careful modernising the story, making sure it still retains its classical heart.

I thoroughly enjoyed it. As with the original Iliad I became hugely annoyed with Elena and Perry for their thoughtless behaviour, causing all the ruckus. And I loved that Hunter, (Hector), is the one who made Perry stand up in various instances, insisting that he man-up to what he'd done and face the repercussions.

It's clever, it's different and to be honest, I'm looking forward to re-reading it and telling more people about it. Find Shanna Norris's website here and Abrams Publishers website here.
Who wrote this? Liz at 10:43 am

Glad to hear this is good :). I read Avalon High and enjoyed that one.

Ooh. I hadn't heard of this at all before your review. And.. it sounds good. I loved both The Iliad and The Odyssey and I find retellings to be really fun. I shall look out for it, thanks for the heads up!