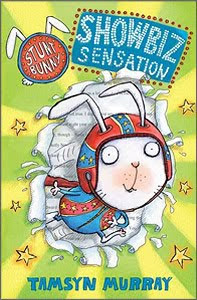 Once upon a time, there was the cutest fluffy bunny-wunny called Flopsy. She lived in a house with a little girl called Susie and her family. Flopsy spent every day staring out of her cage and nothing exciting ever happened to her. The End.

Awwww, now wasn’t that a lovely story? In fact, that’s probably how things did turn out for the other rabbits in Noah’s Ark Pet Shop the day the Wilson family came in to buy a bunny. But from the moment The Wilsons got their new pet home it be came clear that she was no ordinary rabbit. And she wasn’t putting up with a wimpy name like ‘Flopsy’, either. Harriet Houdini had hopped into their lives and things would never be boring again.

After winning the village pet show, Harriet is whisked into the world of show business and finds herself competing in a talent show. If she wins, she’ll be a national star but there are other pets with their eye on first place. Can Harriet compete with an opera singing Poodle? And who is the mysterious man who offers to buy her?

Stunt Bunny, Showbiz Sensation is one of the younger books I've received to review and you know, it was no hardship as we know Tamsyn from her excellent debut novel, My So-Called Afterlife. I knew Tamsyn could do humour for teens but could she do it for younger folk?

Yes, she can. Laugh out loud funny, Harriet Houdini is the kind of pet I would have loved to have had growing up. Creative, intelligent, daring and most of all brave and very clever, Harriet gets into all kinds of trouble in her new home. She constantly escapes and is renamed Harriet Houdini as Flopsy just did not suit.

Her star quality is apparent and soon a tv personality spots her at the pet show and things get a bit out of hand - of course! And further crazy giggling adventures ensue.

Harriet narrates the book. Its confidential and chummy tone and irreverent and tongue in cheek comments will thrill younger readers and amuse parents. Harriet's voice is true and mature, making Stunt Bunny a good read for confident readers and the humour will appeal and hold the attention of reluctant readers. I definitely think Harriet's adventures will appeal to boys too and as the chapters are short they are perfect for parents to sit down and read with the young folk.

I definitely need to mention the artwork. Dotted throughout the novel we have some wickedly funny bits of artwork from Lee Wildish, invariably depicting the chaos Harriet manages to effortlessly to leave in her wake.

I love that Tamsyn has jumped onto the publishing scene and within a short span of time we're getting several books from her. Her writing is fresh and different, filled with humour but also well written. I am looking forward to the next Stunt Bunny. I love that it's entitled: Stunt Bunny: Tour Troubles, with special guests Spike-tacular!

This sounds great - just right for a curl-up-under-the-parasol afternoon! I've got to read it!

Her books are great, too!