The Red Pyramid (The Kane Chronicles) by Rick Riordan 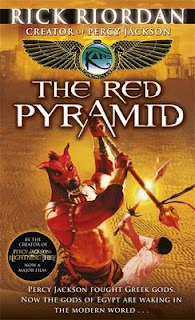 Carter and Sadie have nothing in common but their parents: their father Dr. Julius Kane, a brilliant Egyptologist, and their mother, a famed archaeologist who died under mysterious circumstances when they were young. The siblings barely know each other, but one night, their father brings them together at the British Museum, promising a ‘research experiment’ that will set things right for their family. His plans go horribly wrong. An explosion unleashes an ancient evil – the Egyptian god Set who banishes Dr. Kane to oblivion and forces the children to flee for their lives. Now orphaned, Carter and Sadie must embark on a dangerous quest – from Cairo to Paris to the American Southwest, to save their father and stop Set from destroying everything they care about . . .

Rick Riordan is a complete hero in my book. I love his actioners for boys (and girls) and think he is a very imaginative and creative writer. The Percy Jackson books really swept me away and I really liked the movie too - the look and feel of it was pretty epic. Also, the soundtrack rocked.

But I digress. My heart sank a bit when I read that he was doing books based on Egyptian mythology. It is SO done and most of it is done so badly, it's not even worth reading. But of course, this is Rick Riordan and I really should have known better.

It took me ages and ages to get into The Red Pyramid because of my own stubborness but once I overcame it, it went quickly and relatively smoothly.

When Carter and Sadie meet up after being apart for ages, it is clear that they don't know and don't really like each other. Carter had the opportunity to travel with his dad to various places all over the world whilst Sadie was forced to stay with her grandparents in London. The siblings see the other as having the more exciting or cool life: Sadie is jealous and resents Carter from escaping school and tedious routine, for getting to go on digs and adventures. Carter sees Sadie and is jealous of her time with the grandparents, of the stability she has had, of her education and her friends. Their animosity to each other raises trust issues when all they really should do is run, hope for the best, and have faith in each other.

It would have made for interesting dynamics had Sadie and Carter been stronger characters. It really pains me to say it, but I didn't like either of them, very much at all. Oh, I had empathy for them because of the scrapes they got into after their father's research went south, but I couldn't bring myself to think of them outside of the novel. It is an odd situation but I feel that if I am going to invest time in hanging around with a group of people for an extended period of time, I want to have a vested interest in them and like them. However, having put that across, I am now wondering that if I re-read it, and I focus on the story and their adventures more, I would be less bothered by Sadie and Carter?

The story is told in alternating chapters, between Carter and Sadie. In some instances the chapters crossed over a bit but that was no big problem for me, as it gave a slightly different perspective of events taking place. However, having said that, Carter and Sadie's voices were so similar at some points that it didn't matter whose chapter I was reading, and that made me feel a bit low about the whole experience.

The action and settings are wonderfully over the top, as are their helpers and hinderers along the way. You can tell that the author slowed down some parts to give his characters and readers a chance to catch up with matters, before he goes ahead and sling-shots them into another predicament or action set-piece. The story is very visual, relying on the reader's imagination and growing knowledge of Egyptian mythlology so that you can picture the images and glyphs etc.

I read this book last month, in June and it's taken me ages to get my words in order to write the review. I am very conflicted about The Red Pyramid. It is good storytelling but readers should know that it isn't Percy Jackson. It is still enjoyable but it there is a lot of backstory and history and younger readers may be put off by it. On the other hand, it may encourage readers to grab some mythology books and read up about the various gods and goddesses of Egypt. It really is a marmite book, I think. Probably the second one I've ever come across in the five years I've been reviewing. Some readers will love it, some readers will be pretty ambivalent about it.

Having said that, I am now thinking that the second book in the series will be where everything will kick off full blast. This has definitely been the scene setting, the character introduction, the backstory and the origin story all rolled into one. So perhaps this is the start of something grander and more epic than PJ? Who knows! Only time and book 2 will tell.

Published by Puffin, The Red Pyramid by Rick Riordan is out now.
Who wrote this? Liz at 1:46 pm

I was going to do a review for 'Red Pyramid' as well;). We discussed it yesterday in my 9-12 book club and the response was similar to yours.

I definitley enjoyed the story, but in parts it was too long for me and too many characters were introduced. In the group, the boys loved it but the girls were a little bit more subdued.

Overall, a good book, but I am hoping with the next one he'll really hit it out of the park.

I read it yesterday, and loved the whole adventure thing. Non-stop action! Two things threw me slightly. One was that it was hard to tell the two voices apart now and then (fortunately the name of the sibling writing that chapter was printed at the top of every page, which helped)and secondly, the gods have some really confusing family relationships! Not that that is Rick Riordan's fault, of course! I think, in book two, there'll be a huge fight between Sadie and Carter: there are already hints in 'Red Pyramid' of how terrible that could be.

The story was so inviting, and just like the Percy Jackson series, taught me so much about mythology (and what I can learn for comparing to to modern day myths and folklore.) Rick Riordan knows his stuff, and you can tell that he spends an awful amount of time researching his stuff. I am so impressed with his writing.