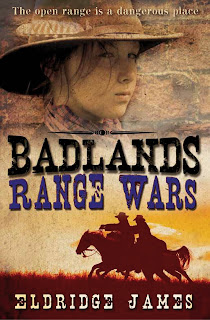 I giggled with glee (for real and no pun intended) when I tore open an envelope that arrived recently. Lo and behold, a cowboy story...with kids as the main characters. Why didn't I think of that? Quickly read the back and it went thus:

The Drygulch gang have been thrown out of their shack with nowhere to go. When they hear of settlers looking for cowhands they think their luck has changed - but it soon becomes clear that someone doesn't want to share the open range. And they're willing to kill for it.

Can the boys stop the bloodshed or will they be next?

You may have seen me waffle on elsewhere on MFB about how I grew up reading Westerns - the only books my dad ever bought, apart from the occasional Wilbur Smith. I still have a deep abiding love for Westerns in print and in movie format. There is just something about a mysterious hero, riding in on a horse, with guns strapped to his hips and that big question of: is he a good guy or a bad guy, hovering in the back of your mind.

Personally I don't recall ever reading or seeing any kids' Westerns, until Badlands: Range Wars, that is. And reading it, made me realise that here, what the author did, was create the origin stories of any of those heroes I've come to know in adult fiction.

I was, needless to say, instantly smitten. B:RW is the second book in the series and I had no problem strolling in and reading it. The opening pages deal with the local mayor of Drygulch evicting the four boys, Jess, Shane, Billy Joe Ford and Andy (and Patch, the dog) from their ramshackle hut they've been living in on the outskirts of Drygulch. The boys are all hard workers, doing odd jobs around town, making sure they never beg, that they never get into trouble. They are proud and careful never to be in anyone's way or to cause any trouble. So for the mayor to evict them, and treat them like common criminals is too much. The sheriff intervenes, trying to help the boys but the mayor has the law on his side but with the sheriff''s insistence, the boys get a bit more grace. At least they can pack up their things properly before being evicted.

Between the four of them, they come up with a plan. Some families have moved into the area to farm and they are needing help as no cowboys have bothered taking up roles at their farms. The boys may not be fully grown, but they are hard workers and they decide to give things a go. They borrow a small trap and some horses from one of their friends in town and head off to the farm of the Amberson family.

As they near the farm, they see two men beating up a third. After a confrontation with the two hoodlums, it turns out that they've been sent to the Amberson's farm to beat up Mr. Amberson and to warn him to stop fencing in his farm and also to stop stealing cattle from his nearest neighbour Colonel McVie. Naturally the boys stand their ground, Billy Joe reveals he has a gun which he keeps trained on the two scruffs. Jesse's not pleased with this but has to admit having guns helped them in this situation. They send the two cowboys packing, after taking their guns from them. They make Mr. Amberson comfortable in the back of the buckboard and head towards the main house.

The Ambersons decide to take in the boys to help around the farm in exchange for food and lodging. It suits the boys fine as they are tough and hard working and in need of somewhere to stay.

Within the first two chapters the entire story and action is set in motion. This is really rare, pared down, interesting storytelling for younger readers. I was taken by the four boys, their honesty and courage in the face of adult wrath and nastiness. Jesse, Andy, Shane and Billy Joe stand by each other and work together to help the Ambersons. What I liked is that Jesse, the defacto leader as he is the oldest, is against violence, preferring to try and sort things out logically and verbally without resorting to violence first. And only looking at the more violent options to resolve conflict at the last moment.

It's strong clever storytelling and I really felt myself liking these four characters. The author gives us a snapshot what it was like growing up during this period in the American west. It wasn't pleasant or easy and the land only got tamed by strong individuals who had courage and foresight.

It was a quick read - I read it in say maybe two hours. It would suit young readers who are keen to tackle something on their own. There may be some question about the colloquial language use, but once you "get" it, it's no problem to zoom through. The chapters are short and snappy and work well. A lot is packed into this slender volume and I can't wait for the third in the series. Or in fact, to read the first.
Also, I'd like to mention the cover as it really drew me in. I liked the side-look of the kid above the title. And the two cowboys racing across the bottom of the page tells you more than anything else what this is about.
Badlands: Range Wars is out now. Find his publisher's Catnip Books website here.

What a total joy - I am a total Westerns geek too and its not often I find another!

I have the first Badlands at home ready to read (thanks too to Catnip) and am bumping it to the top of the pile now.

Brilliant review - what's not to love!

Yeeehaaaaa! So glad you enjoyed. Badlands: Death in Drygulch is on it's way to you by the first coach rollin' past my office today! Pip at Catnip.