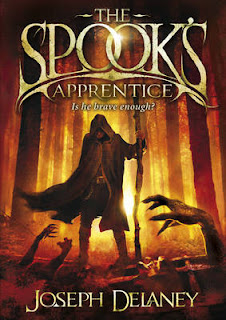 A terrifying series about a young boy training to be an exorcist. Thomas Ward is the seventh son of a seventh son and has been apprenticed to the local Spook. The job is hard, the Spook is distant and many apprentices have failed before Thomas. Somehow Thomas must learn how to exorcise ghosts, contain witches and bind boggarts. But when he is tricked into freeing Mother Malkin, the most evil witch in the County, the horror begins . . .

What struck me the most about The Spook's Apprentice (another recommendation from Year 7's at Oak Lodge Primary) is that the author genuinely doesn't care how scary he's being in this story. Also, his use of language is extremely mature. I fully expected something twee, something Disneyesque and am so grateful that I am wrong.

When we are introduced to Thomas and we quickly discover that he's that little bit different from the rest of his family, probably more like his (mysterious) mother than his father, who is a hard working farmer with a serious disposition who seems a bit bemused by his youngest son.

Events unfold quickly - Thomas sets off with the Spook and soon we realise that the Spook, for all the good he does the countryside keeping it clear of weird critters, is seen as a necessary evil. He has acquaintances but apparently no friends and Thomas struggles to come to grips with the fact that should he one day take over from the Spook, he would be shunned by his family and have little or no friends himself.

It is a harsh reality, one of many. The Spook's character was a revelation to me - here was a fully fledged 3D character and not just a mysterious tutor who said cryptic and mystical things, letting poor Thomas figure it out himself. Written with a sly sense of humour and coming across as likeable, the Spook is someone you would want to know, not just to clear some boggarts from your cellar, but someone to talk to and understand.

Thomas spends a lot of his time swotting up on boggarts, witches and other unlikely beasties, whilst receiving hands-on tutoring from the Spook himself. The Spook is very careful to explain to Thomas how things are done, especially when it comes to dealing with witches. Armed with all this new knowledge, Thomas is still tricked into freeing one of the most evil witches the County has ever seen, Mother Malkin. It's up to Thomas to fix what he's let out and it's a hair raising adventure, to say the least.

I was strongly reminded of Robin Hobb's writing (for older readers who know this excellent author's work) and I couldn't help but be carried away by the story and the characters. Thomas is likable and intelligent but not irritatingly precocious. We have empathy for his situation and can easily see what his motivations are. I always think that when you start shouting directly at a character in a book "don't do it!!", that the author's done his / her job well in involving you with the story.

The Spook's Apprentice is a pretty wild ride - in fact, it's a more than just a bit scary. The language is quite mature and the author expects you to keep up with the plot and the Spook's explanations and adventures. I would definitely recommend this, especially for reluctant readers. It may be slightly challenging but to be fair, so much goes on, that it would be unlikely that they notice how much they've read!

Find the wonderfully creative website for the Spook Books here - the site also links to the author's site and the upcoming movie site. There are several books out in this series, with Spook's Apprentice being the first. And I've had it on good authority that these just become better and better...
Who wrote this? Liz at 8:27 am

This sounds great - I'm going to get it for my son.

Training to be an exorcist? That sounds pretty cool.

This sounds fantastic! Loved your review, too. Thanks!

This sounds really good. Fab review once again Liz, will add this to my pile along with The Changeling. Cheers :-)

I need to read this, it sounds great!