Monster, monster, in the wall, who's the scariest of them all?

As part of our "Monster Mash Up" I've invited Mark Chitty, he of the pretty cool Walker of Worlds book blog review site, to pop by and talk to us about them there critters. And he's complied. Result!
Mark says:

I'm a big fan of anything monster related, from comics to books to movies, although the latter is definitely going to be the one that most people identify with. Whether you're a fan of Godzilla, Alien, Zombies or something a little different, the monster genre has something for everyone.

One of the first things that comes to mind for me is Freddy Krueger and the Nightmare on Elm Street films. I know these aren't strictly monster movies - at least in the traditional sense - but there's something monstrous about the idea of not being safe in your dreams that got to me and scared me half to death when I was a kid - I still struggle to watch the films and then get some sleep afterwards. Despite this I've got a fondness for monster movies that has stuck with me ever since.

I was never one to go for the old style Godzilla type movies when it came to choosing something to watch, I much preferred going for what was around at the time, although I was mainly subjected to whatever my brother and cousin decided we were watching - the gorier the better! Some that spring to mind are films like Critters, Gremlins, C.H.U.D., The Blob, Leviathan, Aliens, Predator and Ghoulies. Since those early days I tend to watch pretty much any monster movie I see on TV, although the acting can get pretty dismal in some of todays 'B' movies.

I can't miss this opportunity to tell you about some of my favourite monster movies and series, some of which are extremely worthy of you time! 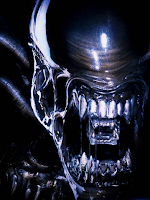 The absolute classic alien monster film. This not only gave us an iconic monster that has endured for 30 years, but took the basic 'b' movie idea and raised it to play with the big boys. The first film was pretty much a straight monster movie and when it was released there were people running out of the cinema screaming and puking because of the infamous chest-buster scene. Aliens took a different apporach which added so much to the mix while the last two films were more of the same rather than too much new, but still worth a watch.

Evil Dead is one of the best monster movies ever. Not only do you get the undead, you also get Ash, the best everyday hero you'll ever meet in a monster film. The first two films are more serious while the third, Army of Darkness, gives a more slapstick approach that is simply classic. The one-liners that Ash comes out with are brilliant:

The Tremors films
Perhaps not the most popular of franchises, especially as the films start a downward slide after the first, but Tremors is a great monster movie. It's got a secluded town, undergraound monsters and a guy that loves his weapons - an excellent combination. While each film adds to the mythology of the Graboids, once you get to the third and an evolution of them is names 'Ass Blasters', you know the series has seen it's day. Still, as it goes with a lot of cheesy films, I just can't help myself.

They're my favourite monster movies - what are your favourites?
Liz says: I have a confession: I have never ever watched a Nightmare on Elm Street movie. Ever. Oh, I know how it goes etc. but have never felt that I wanted to watch.
I luuuurve scary movies. Is that me being a bit Addams family?
Favourites are things like The Excorcist, Prophecy and Fallen. Hmmm, religious undertones there...quick, let me think of others: Arachnaphobia - oh little green apples of doom, this movie did so much to hype up my paranoia about spiders, you have absoloutely no frigging idea. Another favourite is: American Werewolf in London and Wolf with Jack Nicholson. Oh, as is The Village and Sixth Sense and Others - all by that man with the unpronouncable name: Night M Shyamalan. I also have great affinity for From Dusk till Dawn, John Carpenter's Vampires and Interview with a Vampire. But I would think that there are two movies, quite recently made, which I utterly love for no other reason than they freak me out and mess with my imagination:

I have watched this flick so many times. It never fails to freak me out. I've sworn off any kind of camping, especially in Scotland. Admittedly the wolves at the end aren't that scary but it's how much is implied that gets me. That and the fact that they are consorting with the enemy whilst hiding from the wolves outside. Everything about this movie works so well. I love it to bits and it has some of the best dialogue ever!
Cooper: Go on then Bruce, what scares you?
Bruce: The self-destructive nature of the human condition.
Spoon: You're just taking the piss now.
Cooper: What about you, Spoon?
Spoon: Castration.
Cooper: There's no argument there. Joe?
Joe: Only one thing guaranteed to put the shits up me: a penalty shoot-out.
Cooper: Figures. Terry?
Terry: Watching a penalty shoot-out... with Joe.
Bruce: What about you, Coop?
Cooper: Spiders. And women. And... spider-women. 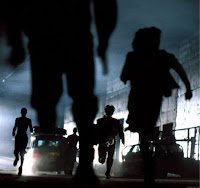 Twenty Eight Days Later - Tagline - His fear began when he woke up alone. His terror began when he realised he wasn't.
Twenty Eight Days Later is just blindingly scary. There is the element of Resident Evil (hmmm, Alice) when Jim wakes up in the movie and he is utterly alone. As he wanders through the streets of London as the sun rises, the devastation becomes apparent. No one is on the street. The whole place is deserted. He walks through places and areas I know so well, having walked them these past ten years and it's so quiet, Christmas morning quiet. He slowly comes to realise that things are not normal. For a movie that starts off with this ominious quiet, there is a lot of show not tell which I admire greatly. Then all hell breaks loose and Jim, Selena, Hannah and Frank jump in their car and they haul butt out of London, going north, hoping that the infected have died. Which is where hell takes a sidestep and the abyss looms. This flick just "wins" so much admiration from me - I'm a complete geek fan! Fantastic stuff.
So, that's me for now. Now, anyone else? What's your favourite scary movie - be it monstrous or not?
Who wrote this? Liz at 8:32 am

Great post! I really enjoyed the Tremors films - so horrifically silly! I'd forgotten all about them until I read this. And I agree about Alien - you can't beat it. Thanks for a really entertaining read!