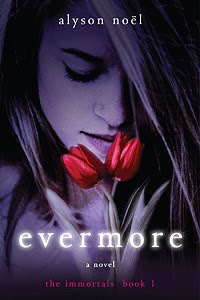 Synopsis
Since a horrible accident claimed the lives of her family, Ever can see auras, hear people's thoughts, and know a person's entire life story by touch. Going out of her way to avoid human contact and suppress her abilities has branded her as a freak at her new high school—but everything changes when she meets Damen. Damen Auguste is gorgeous, exotic and wealthy.
He's the only one who can silence the noise and random energy in her head—wielding a magic so intense, it's as though he can see straight into her soul. As Ever is drawn deeper into his enticing world of secrets and mystery, she's left with more questions than answers. She has no idea just who he really is—or what he is. The only thing she knows to be true is she's falling deeply and helplessly in love with him.
Allyson Noel is a new-to-me author but I know she is very popular. I also know, from reading Evermore that she knows how to spin a pretty decent yarn.
Ever, our main character, tries hiding from the world by appearing mediocre and dull. Hence her wearing baggy clothes and hoodies. She plus into her mp3 player at work to blank out the voices of her classmates and teachers. She limits the amount of physical contact she has with others - contact brings on stronger images from the people she comes into contact with, something she can do without.
I genuinely enjoyed Ever's voice. She used to be the cheerleader, the popular girl, the bitchy girl who hung with only the right people in school. That was her past. Her present and future is very different after the accident that killed her parents and little sister. She now lives with her aunt who works as a lawyer, leaving Ever a lot of time to cope with being on her own, on her own.
Ever's two friends we meet in the novel are unfortunately very much walk-on/walk-off characters. Their roles are small, they act as asides almost, which I found a little annoying and it detracts from Ever's story, rather than adding to it.
But she's not quite alone as her little sister - her dead little sister - still keep making an appearance in her life. Chalk one up to the author for bringing something truly supernatural Ever's life. We see her trying to cope not just with being a psychic but also seeing her sister's ghost and having full blown convesations with her. We see her trying to cling to being mediocre, to being dull, to not stand out.
But that changes when Damen comes into her life. We know there is something off, something different about Damon. He is emancipated, which means he can live his life without his parents, if he had any. School was something to do for him, when he wasn't surfing or hanging out other places.
Ever is attracted to Damon against her will. The descriptions Ever's friends use to describe Damen had me smiling as he does sound a rather nice object of desire. And he stays this way for a small while, until Ever faces up to her own desires, that she genuinely likes him. Their romance is a strange one - hesitant and peculiar but some things Damen says or alludes to had my detectors buzzing.
I wanted to fall in love with Damen, I genuinely did and I seriously thought that he was going to turn out being an immortal vampire (yawns a little) but I didn't and he wasn't. I liked the idea of Damen as this mysterious, incredibly beautiful boy, who saw past the image Ever portrayed and slowly but surely took his time to break down her reserves. I felt That Damen acted strangely and oddly at times during the book, sometimes even a bit manupilative, but to be honest, if his character is examined you could see where he was coming from.
Ms. Noel writes Ever's story with such ease that you let yourself be drawn into her world and as the novel ends you want more. Find the author's website here.
Evermore is now out from Mackmillan's Children's books here in the UK.
Who wrote this? Liz at 9:07 am

Fascinating review - thank you very much!