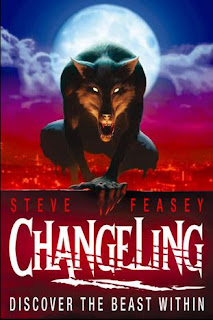 His father was a werewolf. His uncle may be a vampire. It’s time for fourteen-year-old Trey Laporte to discover the beast within. . .

Trey thought he was an ordinary teenager. Then he meets a mysterious stranger, Lucien Charron – luminously pale, oddly powerful, with eyes that seem flecked with fire and skin that blisters in sunlight. Somehow Trey finds himself in a luxury London penthouse, like a Bond villain’s lair. It’s the heart of a sinister empire, built on the powers of the netherworld – werewolves, vampires, sorcerers, djinns. And Trey himself has a power that’s roaring to break free. Is he a boy or is he a beast?

I have seen this funky looking book in a variety of bookshops and online but for reasons I genuinely can’t explain, I never picked up a copy. My interest however was definitely piqued when I visited Oaklodge Primary School earlier this year and got a chance to speak to a group of very enthusiastic Year 7’s. A group of boys had bounded up to me to demand to know if I knew Steve Feasey? Have I read his book Changeling? Will I be reading it? What did I think of monsters? Do I prefer werewolves to vampires? (werewolves, of course!)

I “know” Steve online via twitter and I did in fact tell him that he has a group of very dedicated fans who were waiting impatiently for book 2 of Changeling to come through. Steve must have remembered this as I got an email from his publishers, Macmillan, offering me both book 1 and 2 to read. And being the greedy little bookworm that I am, I said yes, and fell upon the first book of Changeling with undisguised glee and devoured it in maybe 2.5 days (on various commutes around London).

Reading the above teaser premise of Changeling, you may very well think it’s going to be slightly superficial, all gungho action and very little substance. I genuinely thought the same thing, I won’t lie to you.

Was I pleasantly surprised! Trey is a fully formed character whom are introduced to with a big bang. The opening scenes in Changeling tell you so much about him – he’s been orphaned, as his parents had died when he was quite small and his nan whom he had been staying with had also passed away recently. He was in a home for kids like him and you got the sense that it was not a pleasant place. Our story opens with his room which has been torn apart, including some of his favourite items of clothing. He is devastated. He’s just woken up to this wreckage. How did this happen? Why couldn’t he remember anything about the night before? Loads of questions crowd into his scared mind.

Then he gets dragged from the room to meet a mysterious man, Lucien, who claims to be his uncle. There is something odd about Lucien, apart from Trey realising that he genuinely wasn't related to him at all. He speaks in a very formal if archaic way, his movements and use of language is very considered, projecting a certain image. Very soon Trey is running from the home with this stranger, having entrusted Lucien with his life. On one hand he realises he’s doing something reckless and dangerous but something inside him is telling him he’s doing the right thing. Lucien’s story about him knowing Trey’s father and mother holds a ring of truth and this is what convinces him to trust this mysterious man. (warning, not to be tried at home)

Lucien takes him to his (very cool, gadget filled) penthouse in the City, revealing that he is in fact a vampire and that Trey is one of the last, if not the only, naturally born werewolves in the world. Lucien also reveals that Trey is in even more danger than he thought. The fact that Trey’s werewolf nature can go either way or rather, be utilized for either good or bad, is a big factor throughout the story.

Trey has to deal with a lot of changes, very suddenly. He has the help and support of Lucien, his daughter Alexa who is a half-vampire (born of a human mother) and Tom, and Irish hard man who is in fact, a big softie on the inside and whom I immediately fell in love with, just a little. We all need a gruff man who knows his way around the kitchen and the weapons room!

There is a lot that goes on in Changeling. A lot of character development and story progress. It sets up the characters, the world and the villain, Lucien’s brother Caliban, very well. Steve Feasey writes sickeningly well and in a very mature tone. When we meet Trey he’s using slang, his dialogue is sloppy and he’s a very confused and angry young man. As the story moves ahead there is a noticeable change in his attitude which we pick up from the way he interacts with Lucien, Alexa and Tom. His speech patterns change, he becomes a more solid, grounded person. This forms a brilliant contrast to the slavering beast he has within and it is this duality which I think those kids from Year 7 really enjoyed reading about. You don’t feel hesitant rooting for Trey – he has reasons to be angry and want revenge. You just hope that Lucien, Alexa and Tom can indeed help keep his beastly transformations within his control.

A genuinely good read for ages 11+. Some terrifically gory sections (yay!) some gratuitous tooling up scenes (guns and other weaponry) and some soul searching keeps this book well balanced between action adventure whilst telling a solid and clever story. I am looking forward to reading the second Changeling book, Changeling: Dark Moon.
Who wrote this? Liz at 8:22 am

It's been awhile since I was 11 but this definitely sounds like a book I might want to read! Great review, Liz!

This sounds right up my street... I want to read it! Adding to my wishlist right now :)