James Lovegrove on writing about gods and guns

I am so pleased to have the opportunity to put up this guest blog post. I have become a big fan of James' novel Age of Ra (I review it over here at sfrevu.com) and pestered him endlessly with questions and wore him down into popping by to chat to us about creating Age of Ra, writing, characterisation and how he managed to get a girl (me) who goes into spasms around science fiction books because she "just doesn't get them" to not only READ military sci fi but LOVE IT.


A little over two years ago, George Mann of Solaris Books approached me about doing a novel for them in the alternate-history subgenre. I said, “Of course,” partly because I never turn down an offer of work but also because Solaris was swiftly building a reputation for itself as a classy imprint that could also generate sales. I sent George three story ideas, and the one he – and, happily, I – liked the most was The Age Of Ra (although it went by the working title Hieroglyph at that point). I rustled up a plot summary, contracts flew, and next I knew, I was immersing myself in the bonkers world of ancient Egyptian mythology.

Normally I can’t stand research and will do anything to avoid it, but this time it was pure pleasure acquainting myself better with the weird, convoluted continuity of the Egyptian pantheon and their various backstories, feuds and spheres of influence. I’d decided I would make this the most “Egypt-y” novel conceivable, throwing in everything I could fit in – mummies, scarab beetles, animal-headed deities, the works – and see what resulted.

I’d also been hankering to do something in the military-SF vein, for the perverse-seeming reason that I am not a fan of such books. Too often, it seems to me, military SF is an excuse for jingoistic, manly-man, gung-ho antics that don’t show the downside of conflict except, perhaps, in the most sentimental of lights. I wanted to do it differently (my mantra, and my best and worst characteristic as an author). I’ve greatly enjoyed the World War II spy novels of Alan Furst, and I felt here was a chance to write something in that same fatalistic, melancholy style – without skimping on the action sequences, of course.

The fun part of the plotting was establishing which gods would control which portions of Earth and how they would interact with their worshippers. I had to streamline the mythology to suit my purposes. I also had to create credible characters for the main divine dramatis personae, and here I openly acknowledge the influence of Neil Gaiman’s Sandman, a masterclass in showing how to humanise entities who are, essentially, abstract concepts.

I’ll admit I found the “god” chapters of the novel a challenge. All-powerful beings who bicker and connive against one another? You have to tread a fine line between the high-flown and the bathetic in order to get it right. The main trick was to make them believable, sublime yet flawed, and on that front I’m pardonably proud of the scene in which Ra reveals the existential dread at the core of his existence – he is god of the sun, but the sun is just one of billions of stars in the universe, so what value, then, is there in being a sun god? Ra, by the way, was easily my favourite in the pantheon to write. I have a penchant for big, bluff, genial authority figures who can be soft when they want to but stern when required. 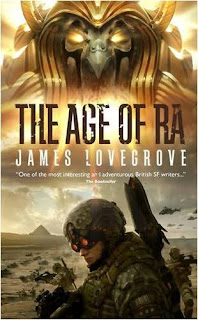 As for the humans in the book, the story hinges on the relationship between two brothers, which is something I have no direct personal experience of, being the sibling of two older sisters. I do, however, have two sons, aged three years apart like David and Steven in Ra, so I extrapolated from how my boys are now to how they might be as grownups. Surely the closeness and combativeness of their relationship, that strange mix of mutual love and extreme violence which typifies their daily lives, would persist into adulthood, mutated perhaps but basically intact.

Once Ra was done – and I’d enjoyed writing it immensely – I wanted to do more, and Solaris wanted more from me too. I had already vaguely entertained the idea of writing a trilogy of “pantheon” novels. I also – here we go again – wanted to do it differently. Hence the upcoming The Age Of Zeus and The Age Of Odin are standalone books, not direct sequels. Apart from anything else, Ra is too self-contained to warrant a follow-up.

Zeus takes the whole gods-versus-humans idea down a notch. In it, the Greek gods are flesh-and-blood beings who actually inhabit the material world, though their divinity still separates them from humankind. In fact, they’re kind of superheroes, or supervillains to be precise, which allows me to bring my comic-geek sensibilities to the prose form.

Zeus is nearly written, although it’s turned into a bit of a behemoth. When I get round to Odin, what I’m hoping to do is play on the notion of whether the gods concerned are actually gods at all. Their divinity will be subjective, depending on who you believe and what you believe. So that’s taking the gods-versus-humans idea down a further notch. In that respect the three books describe a descent from faith through doubt to scepticism, a path most of us take in our lives, having been children who’ll believe anything and growing into cynical adults who’ll believe nothing.

But don’t worry, there’ll still be plenty of room for gore and violence, and even love. What fun would fiction be without those?

– James Lovegrove
**Competition Time**
I have a spare copy of Age of Ra which I bought when I first met James at a signing at Forbidden Planet a few months ago. I am giving you guys a chance to win it - which in itself is cool enough - but, James has agreed to personalise my unread copy to the winner of this competition. You may start squeeling.
The rules, as always, are simple. Email us with your name, Random.org will choose the winner and we'll announce it on 14th October.
Who wrote this? Liz at 9:10 am