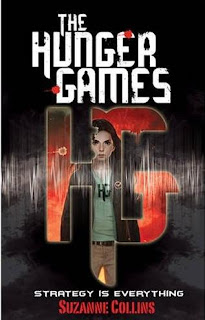 Twenty-four are forced to enter. Only the winner survives. In the ruins of a place once known as North America lies the nation of Panem, a shining Capitol surrounded by twelve outlying districts. Each year, the districts are forced by the Capitol to send one boy and one girl between the ages of twelve and eighteen to participate in the Hunger Games, a brutal and terrifying ﬁght to the death - televised for all of Panem to see. Survival is second nature for sixteen-year-old Katniss Everdeen, who struggles to feed her mother and younger sister by secretly hunting and gathering beyond the fences of District 12.

When Katniss steps in to take the place of her sister in the Hunger Games, she knows it may be her death sentence. If she is to survive, she must weigh survival against humanity and life against love.WINNING WILL MAKE YOU FAMOUS. LOSING MEANS CERTAIN DEATH.

When I picked up The Hunger Games, it was with a mild case of trepidation- generally speaking, getting into the head of a 16 year old girl isn’t something I do for fun.

Katniss Everdeen, the heroine of the novel, lives in a land divided into 12 subjugated districts, kept firmly in check by the iron rule of President Snow, leader of the Capitol, victors of a ruinous civil war some seventy four years previously.

The story opens as Katniss’ district prepares for the shrill, compulsory fanfare of The Reaping, the annual lottery when the Tributes are chosen for the year’s Hunger Games: 24 Tributes, a boy and girl from each of the Districts, locked into a custom built arena to fight to the death until only one remains. . a stark and typically brutal reminder of the dominion of the Capitol.

This year, Katniss is going to the Arena, and things are never going to be the same again.

Because Katniss isn’t going to go out without a fight, not with her little sister, mother and the boy she’s now realising her true feelings for, watching. As she and the taciturn Peeta, her co-tribute, travel to the capital city, she begins to realise the scope and scale of the world beyond District 12, and the vast gulf between her world and that of the Capitol. And as she does, her determination to fight, to win and to stay alive hardens.

But she’s not alone in that; the tributes from the other 11 districts are looking to win as well, and the producers need to put on a good show; it’s a recipe for death- and a damn fine story.

I was pleasantly surprised how crisp and punchy the books were; you’re swiftly drawn into Katniss’ world, and with that, the lives of Katniss and Peeta. They’re both clearly drawn characters with their own goals and personalities and Katniss, rendered cynical at a young age by the grim reality of life in District 12, is given an endearing naiveté in respect of seeing past the obvious actions of those around her, a trait that deftly underlines her character and made her far more interesting.

The growth of their relationship is handled with equal care; it grows subtly, and becomes the foundation for much, if not everything, that comes after. It’s never allowed to smother the pace of the story or distract from the ever present threat of the Capitol and the deadly environment they find themselves in. 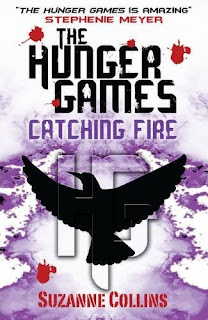 The story continues in Catching Fire, the second instalment of the trilogy, and reaffirms that the Capitol, still headed by the unrelentingly sinister President Snow, isn’t going to take Katniss’ victory lying down (and that’s not a spoiler- it’s written in the first person). Having returned home to the still gritty District 12 with the trappings of a victor of the Games, Katniss should never have wanted for anything again. But the reality of their vulnerability taints everything, denying her the chance to explore her feelings towards Gale, the boy she had to leave behind.

It’s not long before the repercussions of her actions are felt and the long arm of Capitol reaches out to smash apart any semblance of the future she’d hope to build. The same irresistible pace pervades Catching Fire, a turbo-charged rush that won’t let you lay the book aside without a fight.

They’re a fantastic, fun read – all I need to do now is force myself to wait for part 3!

Crisp and punchy they definitely are! I'm so glad you liked them, they're some of my favourite books.

The Hunger Games and Catching Fire are SO good :D
I can't wait until Book 3 and the movie

Aaah, I'm, so glad you've reviewed these books - they're one of my favourite series I've read in a long time! The more people who know about them - the better :)