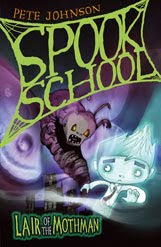 Welcome to Spook School - where lessons include learning how to fly, walking through walls and making objects move! Charlie's not all pleased to find himself at Spook School - he spent quite enough time at school when he was alive! But soon he proves himself to be a pretty impressive spook and is invited to join the Spook Squad, who are sent down to earth to investigate strange and spooky goings on. First on the list is the deadly Mothman, rumoured to be the size of a horse, with really sharp claws and a very bad temper.

This is one of the sweetest, laugh-out-loud funny stories and wonderfully illustrated kids' book I've had the honour to read (nom nom om) in recent times. With illustrations by the very talented Tom Percival (he did the excellent covers for Skulduggery Pleasant) the story of Charlie''s adjustment to Spook School and his subsequent adventures are captured with a charm and wit.

Pete Johnson, the author, is new to me, and I've popped over to his site to see what else he's done and he is clearly a popular and talented guy. I see more books being ordered online very soon!

Charlie's voice is so true and funny that I felt that I knew this little guy immediately. For instance, just look at the opening few lines of the first chapter:

I rubbed my eyes and stared. Something was floating towards
me.

It was a hand.

I’d just woken up. I hadn’t a clue where I was. It was too dark to see
much. And now I’d been joined by a hand.

The hand started flying around me.

‘Hi there hand,’ I squeaked, ducking out of the way.

To my great surprise the hand answered. ‘Ooops, sorry. Now whatever you
do, don’t be frightened,’ it said.

‘Oh, of course not,’ I said to myself: ‘I’m in a weird place, with a
talking hand for company – no reason to be frightened
whatsoever.’

The voice went on. ‘Get ready for the rest of me.’ The next moment a
second hand appeared then some legs and a body.

‘How’s that?’ said a voice. It sounded quite proud of
himself.

And the book gets better from there on in. We discover that although Charlie is a nice kid, he's maybe a little arrogant, not in a nasty way, but because he has this unshaking confidence in his own abilities. Even though he has quite obviously never been dead before, he takes to his new un-life with gusto.

He pulls a couple of naughty stunts at Spook School and the consequences are him being sent to the headmaster's office. I can't help but think that the artist had someone like David Copperfield in mind mixed with Rupert Everitt - a fantastically eccentric, suave but stern looking teacher hauls Charlie over the coals, telling him off for acting up and warns him to watch his step.

But Charlie's amazing skills as a new spook has him being elevated to being part of the school's elite Spook Squad. And even if this is something he truly wanted, he doesn't quite appreciate the consequences of his new role as he gets sent off with his new friend Lewis to discover the truth behind the Mothman haunting one of the houses in the area.

Yes, Spook School is aimed at a very young audience but it's written in a mature style which I thoroughly appreciated. It's not something that will become tedious to read as for an audience and it slightly challenges younger readers and repays them with an engaging story, laugh out loud shenanigans and wonderful artwork to look at.

Spook School is published by Stripes Publishing and is the first in a continuing series. I'm definitely passing this review along to my friends who have young kids - it is a lovely book which will definitely stay on my bookshelf to re-read and perhaps I'll try some of my own sketches. No? Mark says no - he's seen my stick figures and has stomach cramps from laughing at them.
Who wrote this? Liz at 2:00 pm