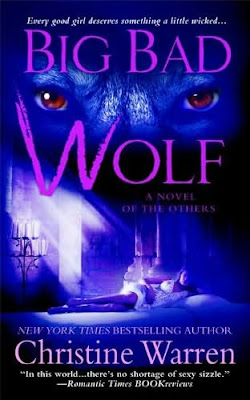 Missy Roper's fantasies have revolved around Graham Winters since the moment they met. But the imposing leader of the Silverback werewolf clan always seemed oblivious to Missy's existence. At least he was, until Missy collides with him at a party and then abruptly runs away - arousing Graham's interest...and wild desires. Lupine law decrees that every Alpha male must have a mate, and all Graham's instincts tell him that the sensual, beguiling Missy is his. Trouble is, Missy is human - every delectable inch of her. Convincing his clan that she's his destined mate, and keeping her safe from his enemies will be the biggest challenge that Graham has ever faced. And now that he is determined to have her - as his lover and his mate - Missy's world is changing in ways she never imagined...

When Liz mentioned to me that there was going to me a Monster Mash Up on MFB I knew immediately which super-sexy werewolf I was going to throw into the ring.

"Big Bad Wolf" is book 8 in Christine Warren's "Other" series, but chronologically fits right at the beginning. The "Others" books are about a community of were-animals, vampires, fae and others, who live in New York and have recently revealed themselves to the humans (talk about opening a can of worms).

Missy is a Kindergarten teacher with the biggest crush on Graham there could be. Unfortunately the wolf has one ironclad rule: No Humans. Well, that's until he sees Missy in The Dress;D. What follows is a fast-paced, super-sexy, laugh-out-loud romp that will always keep "Big Bad Wolf" on the top of my to be re-read pile.

Obviously it can't be all roses and happiness and the fly in Graham's ointment is Curtis, a distant cousin who will never be Alpha because he a spineless whimp who cannot fight, but still tries to get Graham to step down by dusting off ancient laws that the pack hasn't paid attention to in years. One of those rules states that the Alpha has to have a mate who can bear children. To say that Graham has his hands full with persuading Missy of his honorable intentions after ignoring her for months and fending off his cousins sleezy tricks would be an understatement. And then there is the Lupine Matehunt...

I think I may have mentioned already how much I enjoyed "Big Bad Wolf". It is has fabulous characters, scorching chemistry and dialogue that kept me glued to the page and reading until I finished in one sitting.

Well, hmm. I think your enthusiasm has sold me on this book. Never heard of it before, but I'll add it to my TBR list. :-)

Cool! Definitely give her a try, I really enjoy her books

Never heard of this before! Sounds hawt :)