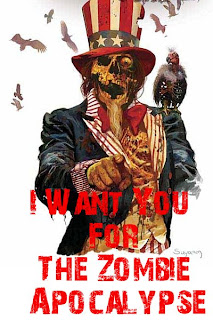 I love the fact that we have this reservoir of untapped talent we can call on to talk to us about all manner of weird stuffs. In this instance, Matt (THE Teen Librarian) chats about Zombies.

When there is no more room in hell, the dead will walk the earth

It shall also be qualified as attempted murder the employment which may be made against any person of substances which, without causing actual death, produce a lethargic coma more or less prolonged. If, after the person had been buried, the act shall be considered murder no matter what result follows. Article 249 of the Haitian Penal Code

Liches, Revenants, Undead – they have many names but none more chilling than Zombie.

The first zombie-related book I can remember reading was a collection of short stories called Zombie edited by Peter Haining, it was published in 1985 so I would have been about 11 or 12. These stories (or the ones that I can still remember) focused on the traditional zombies of Voodoo myth, the dead raised up to do the bidding of their masters, it was in this book that I learned that salt would send a zombie back to its grave. On the strength of Zombie I purchased the novelisation of Dawn of the Dead by George Romero. I can still remember the cover – it was black and white with the title in blood red, it gave me nightmares.

After that zombies sank into the background, they were always in the movies with George Romero tinkering away at what he is best known for and the remakes of the first films that introduced running zombies – totally going against the accepted view of the undead as shambling, unstoppable monsters.

I think that zombies are the most horrific in the pantheon of monsters we know. With werewolves we can remember the words: Even a man who is pure in heart, and says his prayers by night, can become a wolf when the wolfbane blooms, and the autumn moon is bright. They can be stopped with wolfsbane and silver, they can even be cured. Vampires are either tragic or evil but still operating to rules we can understand.

Then we come to zombies: they are pitiless, unstoppable and can look like our best friend, our dearest love, but their hunger is insatiable. 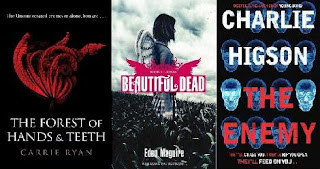 The first zombie-related book I read this year was the excellent Forest of Hands and Teeth by Carrie Ryan, set in a post zombie-apocalypse world it shows how humanity has adapted to survive in a world where they are surrounded by what they now call the Unconsecrated.

Closer to home are The Beautiful Dead a new series by Eden Maguire, the first two books Jonas and Arizona are out now. These books have a totally different slant on the undead, not the mindless revenants of myth, they are returned to find out why and how they died. Aided by Darina, their schoolmate and only person alive that knows that they have returned. The Beautiful Dead mixes mystery, murder and melancholy with themes of love and loss.

The Zombie Survival Guide and World War Z by Max Brooks detail how to survive zombie attacks and what happened during and after the Zom-pocalypse. Charlie Higson brings zombie terror to the streets of London with The Enemy - the first in a new series of novels about a world where everyone over the age of 14 is dead or a zombie hungry for the flesh of a the young.

In the 1970’s when the film Dawn of the Dead was released, zombies were a satire on the mindless consumerism of the people that flocked mindlessly to America’s shopping malls. These days the consumerism is still there but zombies can be seen more as a metaphor for the credit crunch, it was a long time in coming but almost everybody was affected (infected).

Nobody knows where or how the Undead plague started but with the current crop of books rising from the dead I know one thing -no matter how far we travel we are never alone for the dead travel with us!

It seems the zombie apocalypse trend in YA is exploding along with fallen angels.

I wonder how long it will last?

My favorite zombie end of the world scenario was Carrie Ryan's Forest of Hands and Teeth. That book gave me the willies!

The beautiful dead is stalking me, I love the cover.