I've received a promo email about this absolutely stunning looking book and I just have to share my newfound lust for it. 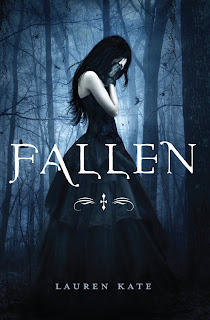 The write-up about Fallen:

Seventeen year old Luce is sent to reform school, Sword & Cross following a terrible tragedy involving her ex-boyfriend Trevor. The details of what happened that night are hazy and Luce is struggling to come to terms with the idea that she might have been responsible.

On her first day at Sword & Cross Luce meets Cam, a good-looking, edgy guy with piercing green eyes and dark hair and she feels strangely attracted to him despite the fact he is not usually her type. However Cam is not the only guy to have attracted her attention. Daniel is captivatingly handsome, almost too perfect, Luce feels instantly drawn to him, as if she already knows him, but she would never forget someone who looked like that, would she?

An epic battle between Heaven and Hell, with echoes of Paradise Lost, Fallen is a story of a love doomed to fail over and over again.

How good does this sound? This looks like it will be an excellent stocking filler for fans and readers of Stephenie Meyer, Becca Fitzpatric, Melissa de la Cruz, Richelle Mead, Melissa Marr and Holly Black. It's due for release on December 17th.
Who wrote this? Liz at 1:19 pm

I started this last night and it's SO good!

I've been seeing great things about this book. Can I say, gimme? :D

I posted my review for this book today! It's AMAZING! But it also sounds so good that it makes me want to read it again. Does that make sense? I looove it!

I got the email too - very exciting! I'm reading this next week, I just can't wait any longer. :)

oh wow, the cover looks amazing! December, you say? *flails also* I wonder if my new job will get an ARC?!?! *hopes*