I did a tiny happy dance on the train this morning when an email came through to me from Random House with some news.

And being the benevolent blogger that I am, I am of course sharing it with you! And because I love giving stuff away, there's a competition too!

Bradley James is a relative newcomer to television but has managed to make his mark in each role he has taken on. He made his television debut in the ITV series Lewis in 2008, in a recurring role opposite Kevin Whately and Laurence Fox, before moving onto Shine’s teen drama Dis/Connected on BBC Three. Bradley’s passion for sports, including football, athletics and cricket, has helped him in his physically demanding role as a young Arthur in Merlin.

Angel's impressive credits include Doctor Who, Life is Wild, Hustle, Tripping Over, Making Waves, International Emmy nominated crime drama Vincent, and BBC medical dramas Holby City and Casualty. Angel also featured in the BBC Three sitcom The Visit. She has worked with Shine before, on teen drama As If. Angel was a member of the National Theatre, and performed in productions including The Statement of Regret and The Importance of Being Ernest.
Competition Time:
Read this carefully because if you don't comply, you will be disqualified. 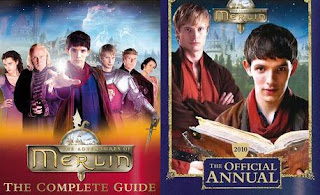 There can be only ONE winner, this one winner will receive TWO copies of Merlin Books, plus either The Official Annual OR a Merlin Activity Book.

The winner will also be entered into a prize draw out of ALL the winners from various sites to win a SIGNED copy of a book.
How cool is that?
The rules are: