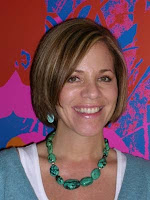 We are very chuffed to bring you this unexpected treat! The Marketing Department over at Macmillan Children's Book sent this little interview along for your reading pleasure.

What did you do before you were a writer?

I worked as a New York City based flight attendant, travelling the world and working on my debut novel, Faking 19, during long weather delays and boring layovers—basically whenever and wherever I could find a free moment to spare!

Where do you do all your writing?

I have a home office where I pretty much hunker down in the morning and stay put all day—just like a “real” office job, only I go to work in my pyjamas!

Which of your characters do you most admire and why?

I really admire Ever for her strength. She was forced into this horrible situation—losing her family, burdened with psychic powers she doesn’t want—and has no choice but to navigate her way through a new life she really doesn’t understand, with no one to confide in. And though she makes some mistakes along the way, she always picks herself up and keeps going, determined to make amends, set things straight, and do the right thing. It’s a pretty tough gig that she’s got!

What’s next after you’ve completed the Immortals series?

I’m working on a new series now, set to debut in Fall 2010, that’ll feature Riley, (Ever’s ghostly sister), as she navigates her way through the afterlife. So far it’s been an absolute a blast to write and I’m really excited about it!

Loads of fans are making casting trailers for your books – if you could cast any actor-actress in the roles of your main characters, who would you choose?

Oh, I hate to admit it, but I am just terrible at this! I think because I can see the characters so clearly in my head, it’s hard for me to cast them with real live people. But I love seeing the reader’s choices, they’ve come up with some really good ones. A few have mentioned Ben Barnes for Damen, and I have to admit that he’s suitably dreamy!

What were your favourite books as a child?

I loved anything by Dr. Seuss, Charlotte’s Web by EB White was the first book that brought me to tears, and Judy Blume’s Are You There God? It’s Me, Margaret changed my life and inspired me to be a writer too!

Is living in the OC as glamorous as what we see on the TV in the UK?

Every time I see one of those shows I can’t help but wonder what I’m doing wrong. My OC, while undeniably beautiful, with one of the most gorgeous coastlines around, consists of pretty much the usual, real life stuff—grocery shopping, bill paying—nothing anyone would ever want to film!

If you could have dinner with any 3 people, dead or alive, who would they be and why?

Leonardo da Vinci because he was an absolute master of so many things, David Sedaris because he can make me laugh and cry in the space of a single paragraph, and Bono because, well, because I love him!

What TV show are you currently addicted to?

Dexter—it so brilliant I’m in awe! But I’m also loving Mad Men and True Blood too.

What are you reading at the moment?

The Encyclopaedia of Ghosts and Sprits—for research purposes!

very good articles
i agree with you
--thanks--

Thanks for sharing! I didn't really like Blue Moon, but I was a fan of Evermore. It's interesting to see how Alyson perceives Ever, and I actually didn't know that she is coming out with new books about Riley soon! I'll have to keep my eye on that. :)