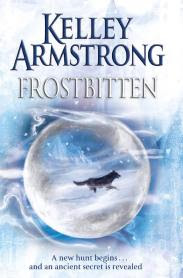 "Frostbitten" is the fourth book about the only female werewolf Elena, who we met first in "Bitten", "Stolen" and then "Broken".

Here is the blurb:


The Alaskan wilderness is a harsh landscape in the best of conditions, but with a pack of rogue werewolves on the loose, it's downright deadly. Elena Michaels, the American Werewolf Pack's chief enforcer, knows all too well the havoc "mutts" can wreak. When the Pack learns of a series of gruesome maulings and murders outside of Anchorage, Elena and her partner Clay travel to Alaska in the dead of winter, expecting to hunt down a pack of dangerous werewolves. But, trapped in a savage, frozen realm, it is their own untamed nature - and their werewolf heritage - they have to confront ...A gripping thriller with a magical twist, Frostbitten is a brilliant new novel from an international bestseller and a writer at the very top of her game.


I was soooo excited when I found out that there would be a new Elena book and "Frostbitten" totally lived up to my expectations. The book starts off with Elena chasing down a mutt, but for once not for the usual reasons and this chase leads you straight into a rollercoaster ride of action, emotions, ancient discoveries and nail-biting tension. If you like kick-ass heroines and fast-paced action, this is the series for you. Actually, Elena's so much more but she does kick butt like a pro.


Elena has to make a big decision about her future, while a letter from her past has thrown her into turmoil. And once again mutts are causing all sorts of trouble. I won't go into detail regarding said trouble, you'll just have to read yourself. Let's just say that Elena has her hands more than full;D.

From book 1, "Bitten", when we first meet Elena and her now husband Clay, I have loved the interaction between the two of them. The chemistry jumps right off the page but at the same time both of them have to battle with bad experiences, betrayal and difficult choices. In "Frostbitten" they have been married for years and have two kids and they are still fighting through issues, both present and future. Despite being werewolves and having to make life-and-death decisions on a daily basis, their exchanges are so believable. You can totally understand why they do what they do and what has led to their behaviour. And the chemistry still jumps off the page!

Overall, "Frostbitten" was a thoroughly satisfying read and I sincerely hope that Kelley will write more Elena books, because the only female werewolf has made a decision at the end of the book that will change her life for sure.

"Frostbitten" is published by Orbit and Kelley's website can be found here.
Who wrote this? Tina at 5:30 pm

Finished this last night, and as always with Kelley love, love, love! While i enjoy her Nadia Stafford and Chloe Saunders (i think) series' there's something about the Women series that is just wonderful.

I'm like you too, i love Elena and her developing relationship with Clay and the kids.

Can't wait to see where the series goes next

I raved about this one too, loved it. I love the whole series but Elena is still the best.

Oh, so glad you enjoyed this! Elena and Clay are my favorite characters of Armstrong books, and I can't wait to read this one!