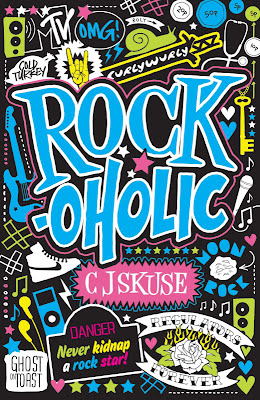 Jody loves Jackson Gatlin. At his only UK rock concert, she’s right at the front. But when she's caught in the crush and carried back stage she has more than concussion to contend with. Throw in a menacing manager, a super-wired super-star, and a curly-wurly, and she finds herself taking home more than just a poster. It’s the accidental kidnapping of the decade. But what happens if you’ve a rock-god in your garage who doesn’t want to leave? Jody’s stuck between a rock-idol and a hard place!

From the pen of C.J. Skuse, author of last year’s super cool debut Pretty Bad Things, comes a tale of rock star obsession gone nuts. Hilariously and sharply explores the fantasy and reality of celebrity obsession through a teenager’s eyes. C. J. Skuse has been billed as the new Nick Hornby for teens.

It really has taken me far too long to review this very excellent, deeply funny and oddly quirky and completely over the top book by CJ Scuse and I apologise.  I read it last year and got to meet the author at the Chickenhouse Breakfast this year.  Needless to say, I went a bit Jody at her.  But without the curly wurly.

Rockoholic's main character is Jody who is one of these girls so many of us would recognise.  Maybe because once upon a time we were like her or we knew someone who was.  Jody is what can be termed a super-fan.  She adores Jackson Gatlin.  It is safe to say, she is more than just a bit obsessed with him.  Everything he sings and does, he does for her alone.  She daydreams about him, she's raised him on a pedestal and he has literally become a god in Jody's eyes.  Jackson Gatlin is part of a very popular band and when she gets the chance to go and see him, she queues up the entire day.  But by the time she gets to do so, things go a bit awry and she is taken to the back of the stage, where the the first aiders go to work on those who have fainted or become ill during the concert.

When Jackson comes backstage, a bit zoned out from adrenalin, uppers/downers and who knows what else, Jody has her chance to talk to him.  But she fumbles and instead pushed a curly wurly (a toffee type sweet, for those of you who don't know) in a silver wrapper at him.  Jackson sees this, thinks it's a knife and lets Jody march him out of the first aid room, to the car where her very best friend Mac is waiting to drive her home.

And, following this "kidnapping" let's just say, high jinks ensue.  Jody is initially so bedazzled by Jackson's presence as she is deeply convinced he is going to see her and fall in love with her as his souldmate.  Instead what she gets is a  spoiled person who acts like a 3 year old.  He throws tantrums, he wees himself, he vomits, he shouts and screams.  It's not pleasant.  Jody is in for a massive wake-up call.  And it is Mac that keeps it all together, explaining to her that Jackson's going cold turkey from whatever drugs he's been on.

Jody has a tough time consolidating her image that she has of Jackson with the reality, even when he's straightened out.  He is not the hero she expected him to be.  He's just a young man who has undergone a massive learning curve when his band made it big.  All he wants is somewhere to sit and write his songs.  Instead he's forced to perform and act in a certain way.  The band's manager seems half demonic and evil and does everything in his power to keep them toeing the line. I felt that the way she broke down Jody's hero into this fallable human was done with great skill and pathos because you could see the character's humanity shine through.

And of course, the world wants to know what has happened to Jackson.  There are newspaper articles and reporters and it becomes a bigger deal than either Jody or Mac anticipated.

A word here about Mac.  He's such a terrific character.  He's slightly flamboyant and has a very arty soul and wears guyliner.  Everyone including Jody thinks that he might be gay but what he really is is a terrific friend and Jody, through her own stupidity and blinkeredness, almost loses him as she runs after Jackson, failing to see what is right beneath her nose.

It is a great book with Jody being this impulsive and very funny character.   The things this girl gets up to makes you moan a bit in your soul because you seriously think that maybe she has no iota of self-preservation at all.  Thank heavens for Mac.  And for Jackson, in the end.

The story ends well, it made me dash away a tear and things are resolved in a very CJ Skuse way.  I am a big fan of Ms. Skuse, who also wrote the superb Pretty Bad Things. Give Rockoholic a whirl - it is incredibly funny.

Find the author's website here.  Rockoholic is out now from ChickenHouse!
Who wrote this? Liz at 8:54 am

Thanks Liz! You know how we feel about 'the Skuse' here at Chicken House. Glad to see so much blogger support for Rockoholic : . )

I keep seeing great reviews for this, I think I'm going to have to give it a go.

the bit with the pop up book also made me cry with laughter. went into this book with no expectations and loved it. fab review