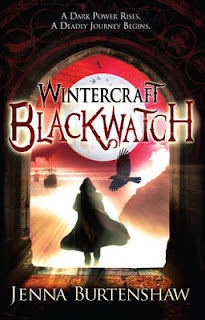 Synopsis
Kate has escaped the clutches of the High Council and Silas has left Albion for the continent. But their lives are forever linked and as the veil weakens, causing Albion's skilled to fear for everyone's safety, Silas and Kate find themselves drawn together by the mysterious and corrupt Dalliah Grey.
I enjoyed Wintercraft and was keen to read the sequel. At the close of the previous book everything was left up in the air. The breadth of Kate's powers was beginning to emerge and the town of Fume has been left in panic. We join Kate as she is awaiting trial in the City Below. The Skilled are blaming Kate for the death of their leader, Mina, and it begins to look as if she has nowhere to turn. Faithful Edgar is by her side but it doesn't look as if this will be enough to help her. I really felt for Kate in Blackwatch - it becomes obvious that her powers (and her family name) are such that no-one trusts her. In Wintercraft she hoped to find a place to belong in the City Below but the Skilled are so fearful that they suggest locking her away for her own good. Edgar becomes a vital companion to Kate and I enjoyed watching their bond strengthen. Edgar also gives a lighter edge to the proceedings as he's a very grounded and practical character which is a good foil for Kate who spends much of her time in-between two worlds.
Silas, on the other hand, has left, managing to dodge the guard searching for him. On a tip-off he heads for the continent looking for Dalliah Grey eager to know if she can help. His journey is anything but calm and he soon finds that it was more than chance that drew him across the water. We're introduced to the lethal Blackwatch and they provide some edge of seat moments throughout. I loved watching Silas struggle with his conscience in this book, something that doesn't usually trouble him. These new fears that he's experiencing for another person are genuinely touching although I found myself viewing him as the resident bad boy. Any gesture, however tiny had me going, "Aw, bless him - he really does care!" In all seriousness though, Silas has to face a whole range of new emotions including coming to terms with his own vulnerability which is fascinating reading.
Blackwatch is brilliantly fast paced and tightly plotted. I loved the way that although Kate and Silas's journeys are separate they are united by their use of the veil and their story arcs. As one of them gets further into trouble so does the other and this mirroring really ramps up the tension. As before I loved the excepts involving the veil - I could read about it for days. As frost creeps over Kate's body she falls deeper and deeper into the otherworld putting herself in great danger. The City Below grows in Blackwatch and as I was reading my mind was scrambling to map it out. It's all huge caverns with tiny walkways, mysterious doors and wrong turnings aplenty. If you've not read Wintercraft then do! Get hold of Blackwatch while you're at it so you can go straight on to the next one. For great background information and extras do check out the website. I'm putting this review up a day earlier than the release date as I've seen that copies are already in stock on Amazon. If you're looking for a new fantasy world to dive into I really recommend these books.
Who wrote this? Essjay at 7:00 am

Great review, I am looking forward to reading these