I stumbled across Thoughtbubble purely by chance- I think it noted on a friend's Facebook update- and, since Liz was going to be off gallivanting with the SCBWI crowd in Winchester over the weekend, I quickly signed up... although I freely admit that the guest list was a significant factor in the decision making process!
After hauling myself out of bed on Saturday morning, I wolfed down my breakfast, said my farewells and trudged down to the station to start my journey to King's Cross and from there to Leeds. Apart from the unexpected complication of Kings Cross tube being closed, necessitating a bracing walk from Euston, it was pretty painless all in all. The train wasn't very full at all, letting me sprawl across two seats; it was also clean, quiet and a lot faster than it would have been by car! I grabbed a large coffee from the trolley and settled back with Devil's Kiss by Sarwat Chadda, which I've been meaning to read for ages- I'm sorry I didn't do it earlier, it's a fantastic read! I almost finished by the time we rolled into Leeds, having only managed to tear myself from the pages to stuff some Jaffa Cakes into my mouth since we left London.
Anyway, after an amusing exchange with a local taxi driver which saw me paying £3.90 to be driven around the block and him losing his precious place in the taxi queue (he could have just told me to take a left and walk 300 yards..) I checked in at my hotel, stashed my bag, freshened up and decided to take a walk to the Armories rather than another taxi. 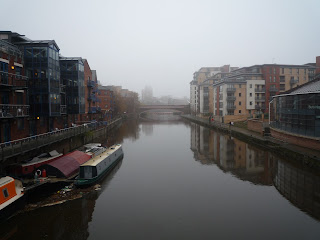 This way I got to see a bit of the city- I quite liked the feel of it, which surprised me and my pre-conceived ideas of the North a bit. I arrived at Saviles Hall in good time and picked up my ticket, which I had pre-booked via the website- I was impressed with the organisation- within 30 seconds of arriving I had my tickets & programme and was set loose on the jam packed hall.
It was crammed with exhibitors, fans and cosplayers, all of whom seemed to be in good spirits, which must've rubbed off as I hardly felt the urge to lash out when I got poked in the eye by a scythe and subsequently slapped in the nuts by somebody's wayward scabbard. I did a couple of circuits to see what was what before settling in for a bit of serious browsing, although I was torn by the choice of rifling through loads of cool stuff or joining the constantly replenishing lines of fans queueing up for signatures and sketches. 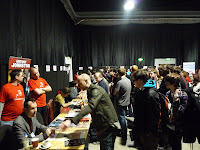 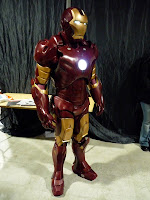 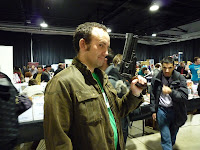 After an hour or so of this I got a seat for the "Do zombies read comics" panel, a discussion on the rising and/or continuing popularity of zombies in comics and horror. I figured it'd be interesting, given my known predilection for the shambling hordes, and would give me a chance to hear Ben Templesmith, Antony Johnson, Charlie Adlard & Sean Philips answering the questions I would've like to have asked- but without queueing for the next 6 hours.
The discussion was interesting.. there were a couple of questions that fell a bit flat (Sean Philips stating that he couldn't really offer a further opinion because he'd never seen a zombie movie in his life and wasn't interested in reading horror either certainly squashed a couple of threads) but the questions from the audience, which I was lucky enough to hear as I was in the front row (next year get wireless mic's guys), prompted some interesting discussions about the pros and cons of using zombies, and trying to create the right atmosphere for horror in a comic format.
After the panel, it was back to (sh)ambling around the hall and visiting the sister site around the corner where the remaining talks were being held, and which would also be the venue for the after party. Here too things were running smoothly, with several volunteers about to keep everyone moving.
So, all in it was a really good day- when I did eventually get to chat with some of the artists, they were friendly and enthusiastic, even after a long day and several hundred sketches down the line. It's always cool to see writers and artists giving something back to their fans like that, and being so gracious about it. It really makes it a pleasure to be, and stay, a fan.
An abundance of keen exhibitors, ranging from independent artists and writers, to the long established ports of call like Travelling Man, meant that the trade stands were varied and each had something new and different to catch your eye, made it a browser's paradise. The talks/ panels were equally varied and very popular and the large guest list meant that no matter what your particular poison was, the was someone there who you'd want to see.
Hats off to the crew who kept things running behind the scenes - and a big thank you to the lovely Red Bull girls who braved the elements and kept my caffeine levels at a high enough level not to get snarly every time a squealing Pokemon careened into me.
The after party was pretty much open to all, and apart from the bar running out of draught, was a pretty relaxed affair. I migrated to one of the couches and had the first of many beers, getting caught up in a wide ranging conversation with immensely affable and erudite Mike Carey, Martin Conaghan and friends. Typically, I spent most of it just grinning quietly and sipping my beer.. a trend which followed me all the way through to the late night bar in our hotel where I wound up discussing the allure of Steampunk with Bryan Talbot and pimping Scott Westerfield's Leviathan.
I just I'd been introduced before the third bottle of Leffe.
All in though, it was a great way to wrap up a day which had exceeded my expectations by a very comfortable margin. I'll definitely be going again next year!
Who wrote this? Mark at 5:47 pm