The Devil's Kiss by Sarwat Chadda 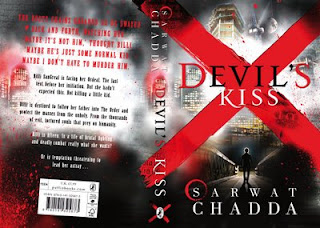 Fifteen-year-old Billi SanGreal never meant to make history. Dragged at the age of ten into the modern-day Knights Templar by her father, the Grandmaster, Billi's the first girl ever to be a Templar warrior. Her life is a rigorous and brutal round of weapons' practice, demon killing and occult lore – and a lot of bruises. But then temptation is placed in Billi's path – an alternative to her isolated life. But temptation brings consequences. In this case – the tenth plague – the death of all first borns and so Billi must choose her destiny. And as she soon discovers, death isn't even the worst...

I have been chomping at the bit to release this review for Sarwat Chadda’s The Devil’s Kiss, published by Puffin at 7th May 2009.

The synopsis of the book should give you an idea that this is a YA novel of a different slant. It is violent, it is grim, it is melancholy, it is about a group of fighting monks fighting the forces of evil and they feel as if they are losing, it is about magic, demons and angels, it has a heroine who has issues and a charismatic, supremely violent and unhinged antagonist.

Looking at this little paragraph I’ve typed up, I am keenly aware that I’ve really stripped much of the story from The Devil’s Kiss. What you see above is truly the very bare bones of The Devil’s Kiss, ignoring character growth and subplots.

Sarwat Chadda has taken years to flesh it out his debut novel, padding the story and the characters and turning Billi, the female heroine, into someone you would want to read about. About both her internal and external struggle and her journey and how she comes to the decisions which she makes in the book. It is also chock-full of adventure and takes place in a hyper-real and very darkly gothic London and you know, it is a pretty terrifying read as the premise is genuinely scary – somehow being responsible for releasing the tenth plague amongst the populace! A heavy burden for a young teen to drag behind her.

The author must have been deeply aware of the implications of turning one of the traditionally perceived good guys in legend and biblical history into the bad guy, but then, it is all a matter of perspective! Sarwat manages to capture the essence of the bad guy and to show him as being undaunted by the possibility that his action are as close to genocide as it can get. And yet, there is that tiny spark of being able to understand where his insane idea is coming from - it will be for the greater good - and he is blind to everything else.

The Devil's Kiss is a non-stop action ride from start to finish and if you are interested in the mythological / occult / theological aspect of things, there are loads to keep you entertained.

Sarwat Chadda has drawn on a plethora of research regarding the Knights Templar, the occult and the various world religions. He then retired to his study and after much wrestling, has come up with a good, strong and fun read about an unrelenting charismatic bad guy and about a reluctant heroine who could tip the scales in favour of or against humanity, either way. Nothing in The Devil’s Kiss is clear cut – nothing is safe, half-hearted or so-so. It is an all out action adventure with a great cast of characters and a lead character with enough demons riding her to turn her into a proper urban fantasy heroine.

The Devil’s Kiss is a recommended summer read and it should have a wide appeal amongst both young adults and adults. For adults missing watching Buffy and for kids who were that little disappointed in the TV show Demons, this is the perfect cure.

Find Sarwat’s blog here and the main website here. The Devil’s Kiss is released in the UK by Puffin on the 7th May 2009.
Who wrote this? Liz at 10:40 am

I WANT TO READ THIS SOO BADLY!

i just got this book yesterday and i am almost done with it!!! this is a really good book!!!