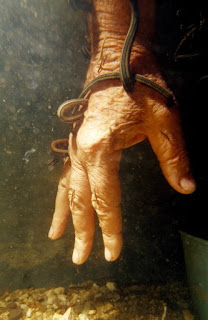 Mark and I are both huge horror fans. He likes zombies and things that lurch about - my type of horror is more the subliminal kind, the stuff that raises your heart-rate by implying and not really showing.
There was a period, not so long ago, where one of the UK tv channels showed horror movies late on Friday nights - I stayed up to watch them all. I freaked myself out and had to make sure I had the lights turned on as I went upstairs, turning them off behind me as I went. Mark was blissfully unaware of this - he was upstairs killing creatures online. My overactive imagination kept me awake at night, I peered outside and could imagine hunched figures loping down the street, keeping to the shadows...train journeys home at night took on a whole different meaning - you had to get home before "they" could get you...
I grew up in a very large, very rambling and majestically creaky house in the suburbs of Johannesburg - the house was one of the oldest in the neighbourhood, dating to the turn of the century. And it was haunted - there was no doubt about it, at all. My dad was a fantastic storyteller, relishing in scaring the living daylights out of me, my sisters and brother and then, when their turn came, my nieces and nephews. He loved scary stories, but was quite a bit of a panic bunny himself, not quite liking the dark hallway that led from the main part of the house to the kitchen and front rooms. He used to dash this part, usually at night, like he could feel long fingers lightly brushing the nape of his neck as he passed the dark lounge area with its odd shadows and shapes.
I remember distinctly suffering hallucinations as a child, brought on by high fevers because of a very bad chest infection, that there were people in my room, elderly, crotchety, stinking, decaying people, who were keen for me to join them. As soon as I was better, I asked to move to another bedroom. I was so freaked out by this hallucination that I could not bear to stay in that room any longer than necessary. Fortunately my mom understood my delicate nature and made sure that my teddies and I got to move to another room, my brother's old room, which was even further away from my parents' room than before - but it suited me fine. If anything attacked me, I could nip out of the backdoor and escape into our orchard. I would be "fine".
As I grew older I started reading Stephen King, Richard Laymon and Dean Koontz and watching horror movies on tv. Nothing freaked me out more than watching The Omen - I loved it, I thrilled at it, I was petrified because of it. But the possibilities, oh, that was wondrous! I then discovered Alien, Ripley was a goddess and the tag line: In space, no one can hear you scream - it gave me nightmares for weeks. And I rewatched Alien over and over until I was dialogue perfect. I read and re-read Dracula and Frankenstein. I haunted second hand shops and bought ratty books by Poe and I taught myself The Raven off by heart. Then I discovered one of Ann Rice's earliest books, The Mummy and a whole new world of reading opened up to me. Through her I discovered her sister's work, and I read Alice Borchardt, and it was even better than Ann's. Steadily I came to discover the new voices in horror, suddenly there were vampires and werewolves and they weren't necessarily the bad guys anymore. And I despaired - because you know, monsters should be monsters and scary, dammit!

And so, if I think about it carefully, I can see the links I made between authors, themes and novels. It was only when I met Mark in the early '90's that I got into watching zombie flicks. We are regular FrightFest attendees and have met people like George Romero when he was in the UK promoting Land of the Dead. We even have a poster and photos to prove it. Touring with George Romero was the FX master Greg Nicotero whose creatures and make-up have graced many a movie.

I don't know why we like being scared - maybe it is because it makes us feel so alive and in touch with our primitive nature. And it's becoming more and more popular. Witness the resurgence in the media when it comes to horror - shock and horror sells: look at the books and the movies and the amazingly creative graphic novels and we lap it up with relish and demand MORE! 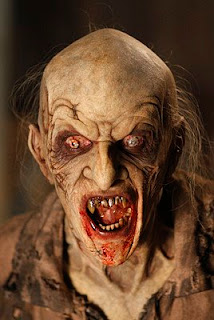 With all of this in mind, Mark and I have decided to dedicate My Favourite Books for the duration of April and May to horror - we have got several authors, fans and fellow bloggers lined up to guest blog, do a standard Q&A during these two months and just to generally hang around make nuisances of themselves. There will also be horror book reviews, movie reviews, graphic novel reviews and hopefully some giveaways, and importantly, some of you may find new authors to try.
So stick around - if you feel you have something to say, email us or comment and we'll be happy to add you to the growing list of particpants on MFB for the next horror-filled two months.
...now where did I put that silver crucifix again? Oh and my fire-axe...