The Chosen by Jerry Ibbotson 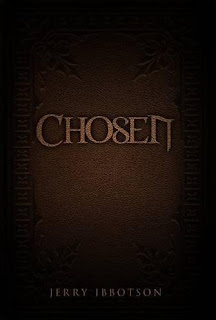 Magic books, undead vicars, God and fondue forks are brought together in the story of Alex Preston: a grumpy, daydreaming office worker who finds a tunnel in the basement at work. It leads to a land full of magic and fantasy. Armed with a sleeping bag and a small torch, Alex leaves his family behind and sets off to explore.

It’s not long before his adventure begins to unravel rather alarmingly and the story builds to an explosive climax. Alex finally discovers the meaning of real magic and learns that when love is stronger than fear, marvellous things can happen.

Firstly, I need to apologise to Jerry Ibbotson for messing up this review. It was supposed to have gone live this past week whilst we were in Malta but somewhere along the line things got completely screwed up and now the review is going live today, instead - a week late!

So - Jerry and team - huge apologies for this!

Secondly - if you are a fan of urban fantasy written cinematically with a very human and real main protagonist, then pop over to Amazon and buy a copy of Chosen. The story follows Alex as he starts on a journey which turns out to be a bit more than he bargained for. Reminiscent of Thomas the Covenant's adventures by Stephen Donaldson Chosen dips from Theland to our own reality.

Chosen is a debut novel (self published) and it has a few niggles which I did not like - Theland relies on a proven Medieval world recipe and I felt that the author could have given the world a definite new slant. Having said that there are some wonderfully illustrated characters, my favourite being Avery Tavistock whose character is delicately drawn and is one of the strongest in the novel, almost stealing the story.

The author has worked very hard and there are some amazingly well written passages which just ask for being read out loud. It is a very good first novel, but there is room for improvement - mainly I would say that the author should be able to toss out his nervousness when it comes to Theland and literally kick back and have some fun with the fantasy elements of his story. I am looking forward to seeing what else is up Mr. Ibbotson's sleeve because he has great talent and with practice he will become a force in genre fiction to be reckoned with.

The last time I checked Amazon had two copies of Chosen in stock - so, if you are interested in reading a well written and imaginative first novel, pop by and check it out or it can be bought from Jerry's site directly. Jerry Ibbotson's site can be found here.

I like how simple the cover is. Great review!

Great review - like it that you've been so honest about it! Sounds like an intriguing and fun read.