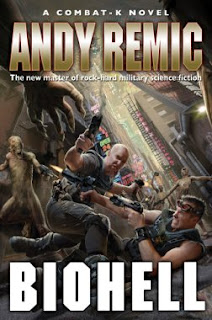 The City: an entire planet teeming with corruption, guns, sex and designer drugs. Humans are upgraded by the injection of microscopic nanobots, courtesy of new technology from the Nano–Tek corporation, but when this highly desirable technology heads onto the black market, millions of people inject themselves with pirated biomods- and transform into zombies. Now they roam the streets, out for blood, packing shotguns and bombs. The Combat-K squad are dropped into this warzone to uncover what’s turned the planet into a wasteland of murder and mutations, and soon their focus is on the darkness at the Nano-Tek corporation itself.


This was my first foray into the world of Combat K. I fished it off my ‘too many books, too little time’ shelf and, feeling a bit sheepish about the dust I’d allowed to gather –sorry Andy-, I cracked it open immediately. Coming straight off my latest bout of 40K adulation, the first chapter or so was a short, sharp bout of cold turkey.

Once the brain cramps wore off and I let myself go with the flow, the pages just kept turning. I hardly noticed the insanely bumpy flight to Malta; my mind was in zombie country, marvelling at the sheer amount of splatter and general chaos crammed between the two covers. It’s is a pedal-to-the-metal smorgasbord of mutants, zombies, killer androids, explosions, gunfire, tanks, giant cyborgs -and a lot of puss. There’s even a twisted romance grotesque enough to be strangely endearing.

Biohell plays out across The City, a lawless urban jungle that spans an entire planet, a teeming hive where almost a generous slice of its population have succumbed to the lure of Biomods, the gene-manipulating nanobots that carry the promise of a better body and a better life… no surgery required, just a quick injection... Once the Biomods begin their rampage, their world goes straight to hell, without passing go or collecting $200. It's not pretty, but then, when you've got zombies toting RPG's, it was never going to be.

Each of the Combat K squad are drawn into this maelstrom through a combination of vengeance, love and betrayal, forced to put aside their differences in order to survive. They’re certainly not the chisel jawed heroes of classic sci-fi adventures; they’re flawed, immoral, fallible and occasionally demented, but they fit the world they live in.

Biohell was a treat to read, a refreshing blast of unadulterated, violent fun*.
It does what it says on the box! You can read an extract here.

*And I’m not just saying that because it’s got zombies with guns.
Who wrote this? Mark at 10:30 pm