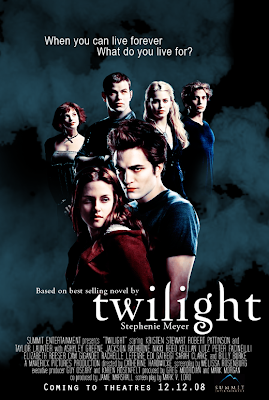 Mark ran out before dinner, Edward-style, faster than light, to pick up a copy of Twilight, the flick, from our local Blockbusters.

We somehow managed to miss seeing it on the big screen entirely. So we settled down with our lovely dinner and watched the movie for the first time.

And you know...I liked it...but I didn't like it at the same time. So much was left out - it was really the very condensed Readers Digest version of the book. Which is understandable as it is a movie and you can't exactly pull a Peter Jackson, now can you?

I felt that the character development could have been better handled - Bella and Edward's relationship is the crux of the movie, the main story, yet their scenes together are disjointed and weird - you don't have a sense of time passing from one scene to the next. So, in all honesty, Bella could have fallen for Edward in maybe four days - or rather, that is how the flick made it seem.

Also, the female lead, Kristen Stewart, went through this hit and miss stage of facial expression acting in the beginning - like she had a nervous tick. It was a bit off-putting and I kept marvelling at Edward's amazing make-up and thinking that the make-up person should have been fired as there was a very visible line of where his make-up ended, and his real skin-tone began.

I'm making it sound a complete farce, but it isn't. The acting could have been much improved but to be honest, the beauty of the area the flick was shot, is simply stunning and made up for a lot. I would have loved to have seen more screen time for Jacob and his friends, but this will no doubt happen in New Moon. I think the chap who played Bella's dad was well cast. He had some of the funnier lines.

And although I enjoyed looking at the exceedingly pretty Edward/Robert Pattinson I am still Team Jacob - all the way. In fact, probably more so now than before.

I am glad I got a chance to watch Twilight. Oh, and the tiny scene of Ms Meyer appearing in the one shot was quite sweet - I liked that. It's like spotting Stan Lee in any of his comics turned movie movies.

Next up to watch over the upcoming weekend is Inkheart - from a book even more dear to me than the Twilight series as Cornelia Funke is a sorceress when it comes to writing elegantly. I have no expectations, having not read any reviews on the movie. I'm going in "blind."

Watch this space. Remember to blink!
Who wrote this? Liz at 10:57 pm

Ooh, yey for Twilight! I'm glad you kind of liked it, and I agree with you about Kristen Stewart's acting. I'm not a huge fan, but she was okay.

Inkheart.. meh. It was alright. I haven't read the books, so I've got nothing to compare it to. Paul Bettany is brilliant, though!

I liked the film, but I could see why it was getting mixed reviews. It seemed like, when they condensed it, they picked out some of the best scenes from the book and just pushed them all together. And because in the book, you're inside Bella's head, you lose so much of her feelings/development in the film, which kind of takes away from the story.
I loved it though. So good.

@prophecygirl - Paul Bettany is a legend. I will definitely buy a copy of Twilight though - I am such a geek! I've asked Mark to put up his own comments too as he thoroughly enjoyed it and he is a tough critic as he does not "do" vampires...unless they are by John Carpenter.

@gapyeargirl123 - nice to see you visit again! I agree with you on the scene selecting - it was random but clearly it still made sense to others who have not read the book, so in that respect it's win!

I'm interested to see what you have to say about Inkheart, I haven't watched it yet.